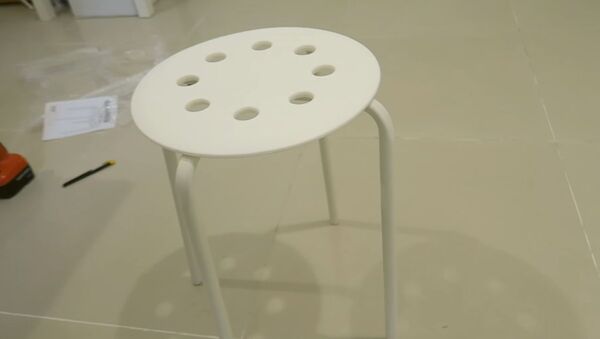 © Photo : Youtube / VlogTimes #Creative
Subscribe
Like all neighbors, Swedes and Norwegians are known to have a vibrant love-and-hate relationship, which sometimes produces hilarious episodes. An instance of these is a Norwegian man's recent genital-related issue with a piece of Ikea furniture, which even gave rise to an internet meme.

Cloudy With a Chance of Ikea Meatballs: Swedish Food Plant Poisons the Air
Alta, Norway native Claus Jørstad has a bad knee. To somehow alleviate his everyday troubles, he procured Ikea's Marius stool to use as a seat in the shower. To his dismay, the seemingly innocent piece of furniture got him into a lot of trouble, Danish news outlet Se og Hør reported.

Despite Claus' hopes of obtaining a reliable bathroom aid, the red Ikea stool with round holes proved to be rather dangerous, as Claus failed to consider what could happen to his soapy private parts when they came into close contact with the holes in the chair. Afterwards, Claus shared his painful albeit funny story on Facebook, providing a detailed report of how his genitals, which he referred to as his "skipper and two sailors," got stuck in the chair.

"As you can imagine, the skipper is the captain down there, followed by his two sailors that dangle. But since you are Swedish, you probably won't like a direct descriptions of genitals, so I will call them the skipper and his sailors," Jørstad clarified in his lengthy Facebook post, directed against Ikea Norway.

In order to extricate one of his "sailors" from the mortal trap, Jørstad had to endure a cold shower with the Marius stool dangling from his lower half, before finally being put out of his misery.

Oddly enough, the Norwegian maritime aficionado was by no means discouraged from using Ikea furniture in the future. To conclude his elaborate Facebook post, he asked Ikea whether the treacherous stool was available in yellow.

EU's Crackdown on Tax Evasion: Swedish Ikea May be Next Target
Since last week, the nautical yarn has been liked over 22,000 times, achieved over 13,000 shares and attracted over 6,300 comments.

One of the most remarkable replies, however, came from Ikea itself, which carried on with Jørstad's maritime metaphors and advised the ill-fated seafarer to either take the stool out of the shower or dress in a proper marine uniform for subsequent "sea voyages."

Among those who read the story and laughed until tears started to flow, was Per Sandberg, Minister of Fisheries and Jørstad's party colleague from the Norwegian Progress Party. Subsequently, he ordered a yellow stool with slightly larger holes to secure his friend's "crew" from further troubles, Norwegian newspaper Alta Posten reported.