Wash Away Your Sins: India to Supply Holy Water to Foreigners 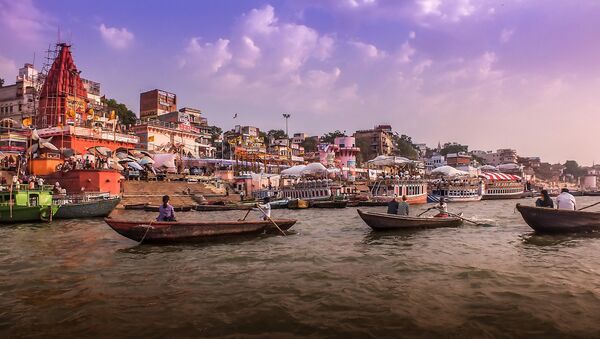 India’s Department Of Post is formulating a plan through which it will export holy Ganga water abroad. Initially, it will target Indians living abroad but hopes exist that the historical importance of the river Ganga will generate demand from other nationals as well. Sources told Sputnik that the government is in talks with the custom departments of various countries to finalize the mechanism to deliver water in these countries.

Currently, the department is selling water collected from the river Ganga at Rishikesh and Gangotri (the origin of the river Ganga). The cost of water delivered abroad will be calculated later.

Wash Away Your Sins at Home: India's Post Offices Sell Bottled River Water
Domestic consumers have to pay a maximum USD 0.53 per 500ml of water. India Post delivers this bottled water through its network across the country. With 155,015 Post Offices, the Department of Post has the most widely distributed postal network in the world.

According to United Nations report, with 16 million people living outside the country, India has the highest number of migrants in the world.

Many in India believe that Ganga water has self-cleansing properties that kills high bacterial content. India had also launched a study costing $22 million which involves 200 scientists across India’s academic institutions.

In November last year, Soumya Swaminathan, Director General, Indian Council of Medical Research (ICMR) in New Delhi had said that there was a high concentration of bacterio-phages, these are viruses that infect bacteria and this might account for the purifying properties of Ganga water.

The river is sacred for millions Hindus who worship it as Mother Ganges.