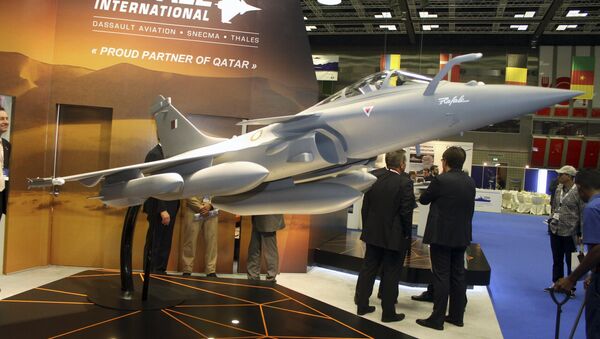 The EU's claim that it is a peaceful organization is undermined by the efforts of its arms dealers, who regularly do business in Asia, Asia Times reported on Friday.

'Good for Business': US Arms Industry Inflating Russia 'Threat' to Boost Profits
The EU project arose out of a desire for peace in Europe following the devastation of World War Two, but European countries don't appear to extend that wish to Asia, where its constituent countries' arms dealers are stepping up their sales.

"According to the Stockholm International Peace Research Institute (SIPRI), in the 2000-2015 stint France and Germany sold defense items to Asian-Pacific nations worth $9,681 billion and $7,166 billion respectively," author Emanuele Scimia wrote in Asia Times on Friday.

Scimia contrasts the surge in sales with the rhetoric from Brussels, where the European Parliament has called for sanctions on arms sales to countries like China and Saudi Arabia. Nevertheless, the sales still go ahead.

While the EU and the US have long banned the sale of arms to China, EU member states have continued to sell weapons there.

"European countries systematically skirt the EU arms embargo on China, which Brussels imposed on Beijing in the wake of the crackdown on Tiananmen Square protests in 1989. China buys up components, dual-use goods and sub-systems designed and manufactured in Europe, seizing the relative technology."

The EU may choose to pursue a similar tactic regarding Saudi Arabia, after the European Parliament voted in February for a Europe-wide arms embargo against the kingdom in response to its bombing campaign in Yemen.

"Subsidizing the arms industry is not the way the once-peaceful EU project will improve its popularity with Eurosceptic citizens. Instead, the EU should invest in jobs and research projects which contribute to the prevention of conflicts," the campaigner wrote on EurActiv, an EU-centered media platform.

Last month the Balkan Investigative Reporting Network (BIRN) and the Organized Crime and Corruption Reporting Project (OCCRP) reported that Central and Eastern European countries have delivered $1.3 million in weapons to Middle Eastern countries, which were later diverted to Syrian and other armed groups accused of  widespread human rights abuses and atrocities.

"Countries selling arms to Saudi Arabia or the Middle East-North Africa region are not carrying out good risk assessments and, as a result, are in breach of EU and national law," EU parliament member Bodil Valero commented on the report.

New Report Exposes EU's Security Links to Refugee-Creating Arms Dealers
In July a joint report by the European NGO Stop Wapenhandel and the Transnational Institute (TNI) called "Border Wars: The Arms Dealers Profiting from Europe's Refugee Tragedy," revealed the profits made by Europe's arms and security industry as a result of the recent instability in the Middle East and North Africa, as well as the migrant crisis which began last year.

The report found that some of Europe's biggest arms sellers are also the beneficiaries of border control contracts, having lobbied the EU to increase security in order to control illegal migration.