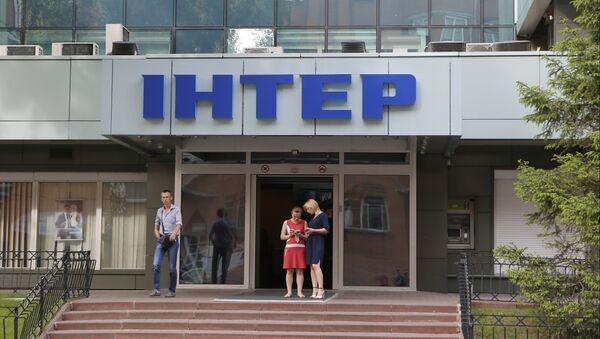 Ukrainian national broadcaster Inter TV was set on fire on Sunday and was forced to start broadcasting from outside; employees say it was deliberate arson, which raises serious concerns about freedom of speech in Ukraine; meanwhile former prime minister Yulia Tymoshenko claims high-ranking officials might have a hand in it.

A building housing the studios and offices of Ukrainian broadcaster Inter TV were set on fire on Sunday, the result of a “heavy attack from so-called “patriots” wearing military uniforms,” according to the statement posted on the channel’s website.

The statement, addressed to representatives of international organizations and to Ambassadors of foreign states accredited in Ukraine, details that the attack came at about 4:30 pm on September 4, when the attackers “set fire to the building, destroyed equipment, and trapped employees in the smoke-filled premises, leading to multiple injuries.”

​Some eyewitnesses told the broadcaster that there were at least 15-20 attackers who set fire both to tires outside the building, and also entered the building with the aim of destroying broadcast equipment.

Some journalists believe that the evening news program, which was about to expose “massive corruption in the trafficking of precious stones in Western Ukraine,” might be the reason behind the attack.

​The statement also reveals that while, “police were conspicuously absent in the immediate area surrounding the building at the time of the attack”, a news outlet partially owned by the country’s Interior Minister Arsen Avakov, was suspiciously quick and accurate to arrive at the site within minutes.

“A feat that would have proven difficult without advance notification of the attack,” the declaration suggests.

One female employee suffered a broken leg trying to escape, and others fled to the building’s roof because the front doors were blocked by the attackers.

The outlet says the attack raises serious concerns about freedom of speech in Ukraine and “the impunity the attackers demonstrated at the scene strongly suggests some form of official protection for their actions against the independent media outlet.”

#Ukraine: a group of young men had been detained by the police after arson attack against Inter TV and then released pic.twitter.com/5ofnSAdrAE

​On Monday, Russia’s Foreign Ministry has condemned the attack saying that it is a gross violation of the Freedom of Expression principle.

Meanwhile, the country’s former prime minister and now opposite political leader Yulia Tymoshenko says that some of the country’s high-ranking officials might have a hand in the Sunday attack.

​“Every entrepreneur knows that he had never before come under such violence which he is experiencing right now,” RIA Novosti reports Tymoshenko said on Monday at the meeting of the Conciliation Board of the leaders of the country’s parliamentary factions.

“The key TV channels are now being set on fire. Do you think you can suppose here that it is the fight against the Kremlin?” she wondered.

#Ukraine: Ukrainian TV Inter attacked and arsoned by a group of people who accused Inter of being "pro-russian" pic.twitter.com/Jf32qnkXcT

​“No, my dear friends. It is the humiliation and destruction of Ukraine, as no investor in the world who has seen what had happened with the county’s leading TV channel will bring his funds here,” the politician stated.

​Tymoshenko further said that “no one has any doubts that there are high-ranking officials behind what has happened with the channel.”

“Otherwise nobody would have allowed this and the police would not have been called off 15 minutes prior to this [the blaze],” she said.

​“All of this is an inseparable part of the chaos which our country had submerged into,” Tymoshenko finally stated.