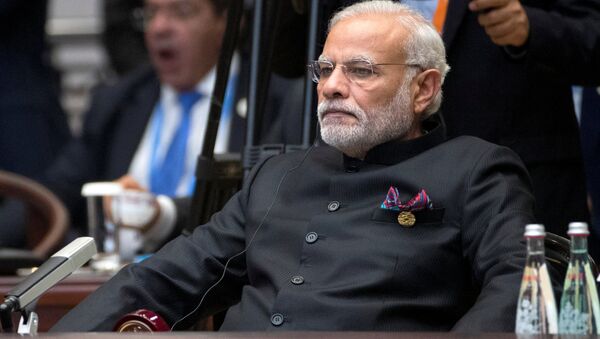 © Sputnik / Mark Schiefelbein/Pool
Subscribe
Indian Prime Minister Narendra Modi has urged the international community to act in unity and respond to terrorism by cutting off its supporters and sources of financing.

G20 Leaders Reaffirm Commitment to Fight Terrorism in All its Forms
New Delhi (Sputnik): Speaking at the G20 Summit in the Chinese city of Hangzhou, India's Prime Minister Narendra Modi said: "We expect the international community to speak and act in unity and to respond with urgency to fight this menace. Those who sponsor and support terrorism must be isolated and sanctioned, not rewarded. India appreciates the G20 initiative to combat the financing of terrorism."

Without naming Pakistan, Prime Minister Modi said, "Growing forces of violence and terror pose a fundamental challenge. There are some nations that use it as an instrument of state policy. Indeed, one single nation in South Asia is spreading these agents of terror in the countries of our region. India has a zero-tolerance policy toward terrorism. For us, a terrorist is a terrorist."

Relations between India and neighboring Pakistan have continued to sour ever since Pakistan declared that the Hizbul Mujahedeen terrorist Burhan Wani, who was killed by Indian security forces in Kashmir, was a martyr. Pakistan has accused India of human rights violations in the Kashmir Valley. Meanwhile, India has accused Pakistan of funding and fueling the unrest in the Kashmir Valley.