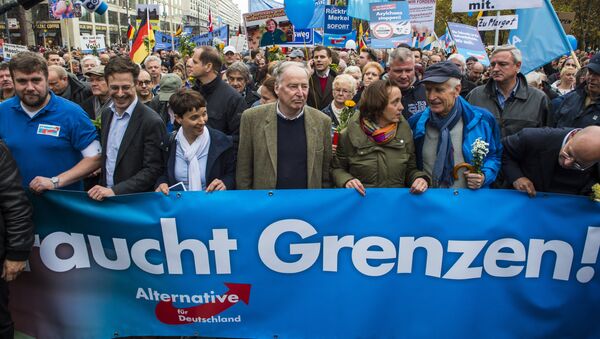 Sunday's state elections in Mecklenburg-Western Pomerania saw the right-wing populist, anti-immigration, Eurosceptic Alternative for Germany (AfD) party trounce the party of Chancellor Angela Merkel in her home state. Commenting on the results, Sputnik Deutschland spoke to several regional officials, many of them shocked by the stunning upset.

Commenting on Sunday's showing, Leif-Erik Holm, the leader of AfD in Mecklenburg-Western Pomerania, jubilantly described his election result as "perhaps…the beginning of the end of Merkel's chancellorship."

Merkel Urged to Get Tough on Immigration After Humiliating Defeat
At the same time, speaking to rumors that Holm might run for higher office in federal elections next year, the politician emphasized that while "Berlin is always a worthy goal, for the next five years I will be here."

The Christian Democrats' response was, predictably, one of huge disappointment. Nevertheless, Vincent Kokert, the head of the CDU faction in the regional assembly, the Landtag, said that his party would not give up. "AfD should not celebrate so much. We've seen others who came up quickly and went back down even faster. Sufficie it to recall the Schill Party," Kokert said, referring to a right-wing populist party active in Hamburg between 2000 and 2003.

For their part, the ruling Social Democrats, despite managing to maintain their plurality in the region, were also shocked by the AfD's ability to garner such a large percentage of the vote. Speaking to Sputnik, Mathias Brodkorb, SPD politician and the region's education minister, emphasized that anger over Merkel's immigration policy was the main reason for AfD's electoral rise.

Ultimately, Brodkorb suggested that Merkel and the CDU should not be surprised at their poor showing, given their failure to take account of the needs and experiences of the people.

Le Pen Praises 'AfD Patriots' for Trouncing Merkel's Party in Local Elections
Mecklenburg-Western Pomerania's economy minister, CDU politician Harry Glawe, essentially agreed with his counterpart from the SPD, noting that while "we had reduced unemployment and created a lot of new jobs, the refugees became the main issue, from which we suffered the most."

However, some CDU officials remain defiant. CDU member and regional Minister of Justice Uta-Maria Kuder said that while she was disappointed, she also felt that "we did a good job," with the migrant issue unfortunately casting a shadow over the entire campaign. Overall, Kuder insisted that "Merkel has done the right thing."

Meanwhile, asked by Sputnik about whether AfD has any plans to field a candidate in next year's federal election, Alexander Gauland, the party's co-founder and party leader in the state of Brandenburg, emphasized that it's "too early" for that. "If you nominate a candidate, you must have a chance of winning. We have not reached that level yet," the politician humbly noted.

At the same time, Gauland added that the party is thrilled by the results in Mecklenburg-Western Pomerania, even if it didn't manage to defeat the ruling SPD. "There cannot even be any question of any disappointment. We have existed for three years. We have defeated the Chancellor in her home region. We have every reason to be happy."

Sunday's results are expected to translate into 26 seats for the SPD, 18 for AfD, 16 for Merkel's SDU, and 11 for Die Linke.