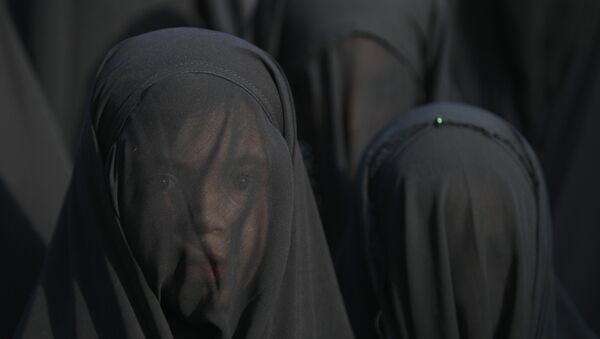 The Daesh jihadist group, which earlier made it obligatory for women to fully cover their bodies with a black veil when appearing in public, has now been reportedly forced to change its self-imposed rules over security concerns.

To Ban or Not to Ban: Burqa Has Become Political Issue in Europe
The terrorist group has reportedly released an order stating that no woman is now allowed to be wearing a niqab or burqa, a full body veil, when entering security and military facilities in the Daesh-held Iraqi city of Mosul.

The news was reported by Al Alam News Network, state-owned Arabic news channel broadcasting from Iran, citing its local source in the Iraqi province of Nineveh.

The decision, according to the source, was made after some women wearing the garment killed a number of Daesh commanders and militants in the past months.

Throughout the past two years, the jihadist group has forced women in Iraq and Syria to wear the burka and niqab, fully covering their bodies in public, claiming that such a strict dress code is based on Sharia law.

'Burkini Ban is a Silly Way to Deal With a Serious Problem'
The media reports revealed that the women who disobeyed the rules were severely punished, sometimes physically.

Earlier in August local media reported that that Daesh ‘morality police’ attacked a young Syrian woman dressed in a full burqa and face veil — because they thought that her eyes were “too exposed.”

Now the Iraqi women seem to have a little leeway with their attire, at least when entering security and military facilities.