US Preparing Electronic Warfare for 'Force-on-Force Conflict in Europe' 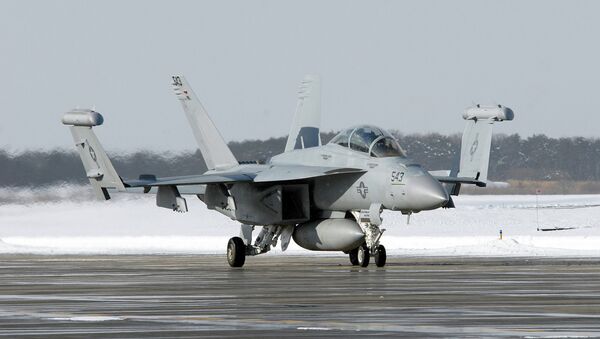 © Flickr / Official U.S. Navy Page
Subscribe
Having looked at the Russian military’s cyber warfare modernization, the United States rushed to develop similar capabilities that could be used in the event of a “large force-on-force conflict in a place like Europe.”

On August 11, the US Army announced the creation of the Army Rapid Capabilities Office to prevent “capability gaps” that have formed within the American military in recent years.

US, China Prepare for Electronic Warfare Standoff in South China Sea
“Our adversaries are modernizing at a rapid rate, and in some cases, our capabilities are inadequate to keep up, to maintain our edge,” Maj. Gen. Walter E. Piatt, who is in charge of the operations in the new office said in a statement. "We need to … make sure that they are offset from us, not the other way around.”

Doug Wiltsie, a director of the Rapid Capabilities Office, at the time said that it will focus on “urgent, immediate or emerging threats” defined by the commanders on the ground. Army Secretary Eric Fanning obscurely remarked that the new establishment will work on new capabilities development rather than on creating new equipment.

According to Defense One citing a military analyst, many military authorities have been shocked by the pace of innovations in electronic warfare showcased in Russia’s Syrian campaign, which saw the use of “new waveforms that can disrupt an adversary’s electronics and paint enemy stealth aircraft.”

According to Fanning, “the combination of unmanned aerial systems and offensive cyber and advanced electronic warfare capabilities … provided Russian forces a new degree of sophistication.”

Silent Protector: Russia Develops Hi-Tech Jammer to Block Enemy Electronics
On Wednesday, he said that the new office will be accelerating development of cyber, electronic warfare, and position-and-timing gear.

Steven Pifer, a former U.S. ambassador to Ukraine, observed that the establishment of such an office would mean that the US has shifted its focus from the Middle East, where it has participated in a row of conflicts, to Europe.

“My guess is … that after 15 years of doing largely counter-insurgency operations in the Middle East, the Army is now taking a look at how it would do large force-on-force conflict in a place like Europe,” he said.

000000
Popular comments
hmm, so they've bombed out - so to speak in the ME and now need to turn to another theatre of ops. I don't whether or not to be worried for the many of us who can translate the drivel which they come up with. :)
michael
4 September 2016, 09:36 GMT
000000
Russia is displaying 50 years old Soviet tech.. Many believe is as old as 70 years. t least in theory. This will take DECADES just to catch up. Another item worth seeing is that they want to STEAL TAX PAYERS DOLLARS. U.S pensions are CUT at least 40%. While E.U was more respectful and outright cut and explain there was no other option, U.S derived a new formula for COLA. COLA mean Cost Of Living Allowance. Under OBAMA'S , A REAL DIFFERENCE THAT YOU WILL SEE, Pensioners are BROKE and have HUGE co pays. Now where the cash be coming from? And a war with Russia? HA! I wouldn't. Costs will be enormous. Russia will need cash.. Who doesn't? It's good strategic partner , CHINA will send a few trillion ..in Euro equivalent. HERE ,., WIN!! .. IF both doesn't unite and create a super army never seen before. Yes they can dev, new vehicles extremely modular to each add own modules and tech. And cooperate in some fields. Finally making Russia China a real joint union. Don't go asking for what you may not be able to eat.
cast235
4 September 2016, 10:22 GMT
000000
Newsfeed
0
New firstOld first
loader
LIVE
Заголовок открываемого материала
Access to the chat has been blocked for violating the rules . You will be able to participate again through:∞. If you do not agree with the blocking, please use the feedback form
The discussion is closed. You can participate in the discussion within 24 hours after the publication of the article.
To participate in the discussion
log in or register
loader
Chats
Заголовок открываемого материала
Worldwide
InternationalEnglishEnglishMundoEspañolSpanish
Europe
DeutschlandDeutschGermanFranceFrançaisFrenchΕλλάδαΕλληνικάGreekItaliaItalianoItalianČeská republikaČeštinaCzechPolskaPolskiPolishСрбиjаСрпскиSerbianLatvijaLatviešuLatvianLietuvaLietuviųLithuanianMoldovaMoldoveneascăMoldavianБеларусьБеларускiBelarusian
Transcaucasia
ԱրմենիաՀայերենArmenianАҧсныАҧсышәалаAbkhazХуссар ИрыстонИронауОssetianსაქართველოქართულიGeorgianAzərbaycanАzərbaycancaAzerbaijani
Middle East
Sputnik عربيArabicArabicTürkiyeTürkçeTurkishSputnik ایرانPersianPersianSputnik افغانستانDariDari
Central Asia
ҚазақстанҚазақ тіліKazakhКыргызстанКыргызчаKyrgyzOʻzbekistonЎзбекчаUzbekТоҷикистонТоҷикӣTajik
East & Southeast Asia
Việt NamTiếng ViệtVietnamese日本日本語Japanese中国中文Chinese
South America
BrasilPortuguêsPortuguese
NewsfeedBreaking
21:20 GMTUnited Airlines Pilots, Workers Refusing to Fly With Unvaccinated Colleagues, Court Docs Reveal
21:17 GMTEx-Lehman Brothers Exec Predicts 3 More Years of Inflation, Tech Stocks to 'Get Crushed'
21:16 GMTBacking for Increased US Police Budgets Surges to 47% Amid Rise in Violent Crime – Poll
21:14 GMTAt Least 6 Killed, 10 Injured in Attack by IS Militants in Eastern Iraq - Source
20:44 GMTSection of Biden's Infrastructure Bill for Fighting Climate Change Reportedly Tops $500 Billion
20:44 GMTManchester United Hierarchy Reportedly Split on Ole Gunnar Solskjaer’s Future
20:10 GMTTexas Becomes Latest US State to Pass Anti-LGBTQ Law, Banning Trans Girls From Female Sports
19:53 GMTLe Pen Says Hungary's Orban Backs Launch of Hard-Right Alliance in Coming Months
19:51 GMTInvestors George Soros, Reid Hoffman Help Launch Group to Combat Online Disinformation
19:23 GMTChicago City Council Prepared to Vote on $31 Million Program to Assist Low-Income Households
19:16 GMTMedia Reveals Photos of Alleged Arrested Mossad Agents in Turkey
19:02 GMTCould Russia's Zeus TEM Be a Gamechanger for India's Space Ambitions?
18:57 GMTScientists Spot Signs of First Planet Outside Milky Way
18:57 GMTOusted Sudanese Prime Minister Hamdok Reportedly Returns Home
18:51 GMTReporters Without Borders Demands Closing Assange Extradition Case Ahead of New Hearing
18:50 GMTAfter Fiasco in US, Amazon Reportedly Signs Contract for Cloud Service With UK Intelligence Agencies
17:50 GMTOver 17.2 Million Cybersafety Threats Blocked in India, Report Says
17:25 GMTAfghan Soil Will Not Be Used Against China, Assures Taliban Leader After Meeting With Wang Yi
17:24 GMTPakistan Has Dominated India in 'Kinetic Conflict' Since Balakot Strikes, Minister Says
17:20 GMTSurvivors of Bhopal Gas Tragedy Launch Campaign as Millions Still Struggle for Compensation