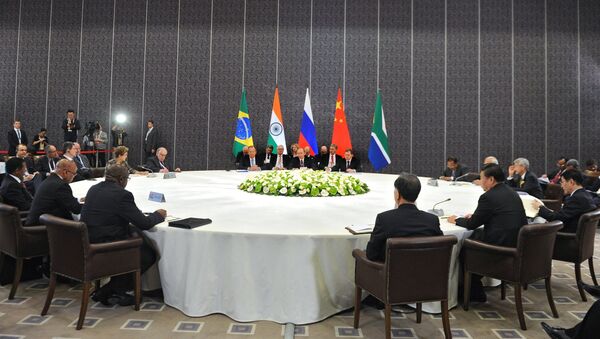 Russian President Vladimir Putin is taking part in an informal meeting of BRICS leaders on the sidelines of the G20 summit in the Chinese city of Hangzhou on Sunday.

HANGZHOU (Sputnik) — Prior to the meeting Chinese President Xi Jinping greeted the BRICS leaders in his residence and they took part in a photographing ceremony.

BRICS is an association of five developing economies, including Russia, China, Brazil, India and South Africa, which comprises over one third of the world’s population. The five nations have a combined nominal GDP equivalent to approximately 20 percent of gross world product.

The next official BRICS Summit will be hosted by India during its chairmanship, and is scheduled to take place on October 15-16, 2016 in the city of Goa.

The G20 summit will take place in the Chinese city of Hangzhou on September 4-5.