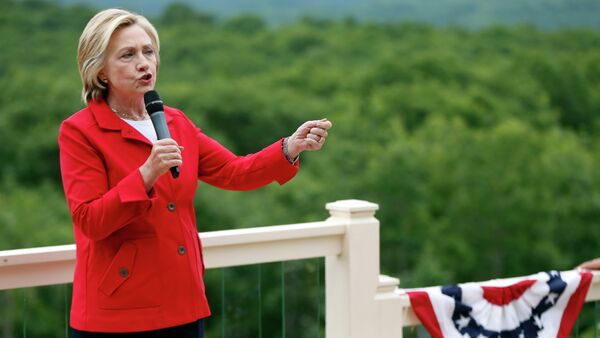 Presidential candidate Hillary Clinton has not talked to press for 274 days, as of September 4th. Is she hiding from the public, as Donald Trump suggests? Apparently not, as media reports she put her time to a good use, answering questions from the “ultra-rich”… For a donation.

This year's developments have created a great lot of questions that the American (or, maybe just any) press would like to ask Hillary Clinton. Even the so-called mainstream media finds it hard to defend the Democratic nominee, or at least one could make such an assumption, reading a New York Times article, which explains in detail that Hillary Clinton was, in fact, very open to questions — but of certain people only. And these are the crème de la crème of America's richest people.

According to New York Times's Amy Chozick and Jonathan Martin, instead of holding rallies and giving interviews to the press, Hillary Clinton has packed her schedule with fundraising events that reportedly brought her $50 million in the last two weeks of August. She took part in some 22 events in the span of 14 days, pricing her time at some $150,000 per hour, fielding "hundreds of questions from the ultrarich in places like the Hamptons, Martha's Vineyard, Beverly Hills and Silicon Valley."

The news outlet provides some interesting numbers: for example, at least 10 people paid $250,000 each to attend Clinton's event in Sagaponack, N.Y., which raised a total of $2.5 million in a single day.

Interestingly, her campaign appears to have a very clear pricing for "varying levels of access to Mrs. Clinton."

"For a donation of $2,700, the children (under 16) of donors at an event last month at the Sag Harbor, N.Y. estate of hedge fund magnate Adam Sender could ask Mrs. Clinton a question. A family photo with Mrs. Clinton cost $10,000, according to attendees."

It would be incorrect to say Hillary Clinton spent all her time answering questions from interested attendees, including, among others, Calvin Klein, Harvey Weinstein and Justin Timberlake, as some of the hosts intentionally tried to limit "confrontational engagements", according to Amy Chozick.

"Lady Lynn Forester de Rothschild, a backer of Democrats and a friend of the Clintons', made sure attendees did not grill Mrs. Clinton at the $100,000-per-couple lamb dinner Mrs. Forester de Rothschild hosted under a tent on the lawn of her oceanfront Martha's Vineyard mansion," writes Chozick.

So, apparently, this is why Hillary Clinton, a candidate who her campaign staff try to portray as the candidate "for the people", failed to answer questions from the press, instead opting to field the concerns of the wealthiest Americans.

The bitter irony is that candidate Clinton attacks real estate mogul Donald Trump as an "out-of-touch billionaire", while Trump's campaign relies mostly on online and direct-mail fundraising. Of course, the Republican candidate also turns to big money donors, but, at least, he doesn't hesitate to run rallies and give network interviews to be accessible to everyday working Americans.