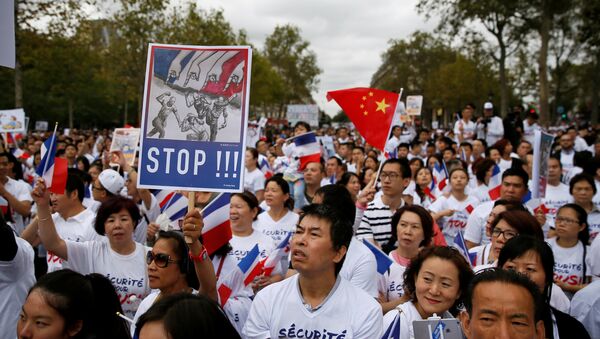 Thousands of people protested in Paris on Sunday against violence and racism, in particular, against crimes targeting the Asian community in the French capital, according to multiple social media reports.
Dozens of Thousands Rally in Taipei Protesting Against Pension Reform
MOSCOW (Sputnik) — In mid-August, a French Asian, Zhang Chaolin, 49, was attacked in the Parisian suburb of Aubervilliers by three young men while walking with a friend. The attack slipped him into a five-day coma, after which he died. The friend was injured. The Chinese community in Paris and its neighborhood bitterly mourned Zhang's death, and at least 500 people have gathered to have a memorial march and pay tribute to him.

The local organizers of the Sunday demonstration and their supporters downloaded multiple images on social media depicting people, of Asian and European appearance, many of them in white T-Shirts with a "Securite Pour Tous" (Security for everyone) slogan. The people marched in central Paris, from the Place de la Republique to the Place de la Bastille.

The protesters, including children, grownups and elderly people, carried flags of France and placards reading "I love safe France," "Stop to racist prejudice," "[Zhang] Chaolin died for nothing," and demanded better police vigilance and security for the French Asians.

According to media reports, the number of demonstrators could be up to 14,000.

Asians amount to some 1.5 percent of the French population, mostly inhabiting major urban areas, like Paris.