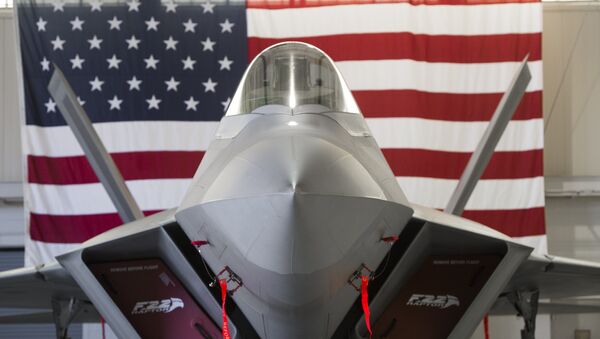 © AFP 2023 / SAUL LOEB
Subscribe
International
India
Africa
Defense contractors and military officials in the United States have come up with the non-existent Russian threat to boost defense spending and make more profits, Michael Lehner wrote for NEOPresse, adding that the Western media has played a major role in this process by besmirching Russia and President Vladimir Putin.

"Our media outlets have in recent years … presented Russia and particularly its president as an absolute evil whenever possible. Even the most absurd 'news items' were spread … if they could show Russia and Putin in a bad light," Michael Lehner wrote for NEOPresse. "The reason behind this is actually quite simple: a conflict with Russia is good for business."

This is a stance that US defense contractors apparently share.

Baltics Tense Over Moscow's 'Muscle Flexing' Amid NATO Buildup on Russian Border
"The arms industry – both directly and through its arsenal of hired-gun, think-tank experts and lobbyists – is actively pressuring NATO member nations to hike defense spending in line with the NATO goal for member states to spend at least 2 percent of gross domestic product on defense," journalist Lee Fang wrote for the Intercept.

Only five NATO countries spent more than 2 percent of their GDP on defense last year. High-ranking military officials in the US, including Defense Secretary Ash Carter, have often tried to convince their European partners to fork out more.

Unsurprisingly, US weapons makers are using the non-existent threat emanating from Russia and Moscow's rearmament efforts as an argument in these efforts.

US 'Funneled Weapons to Terrorists' in Syria - Rand Paul
Fang cited retired Army Gen. Richard Cody, a vice president at L-3 Communications, the seventh largest US defense contractor, as telling investors that an "uptick" in defense spending was coming due to "resurgent" Russia and "we postured ourselves for it."

The Pentagon used the same tactic to push for more funds during congressional hearings on the National Defense Authorization Act earlier this year. The US military leaders urged the Congress to spend more on defense to counter Russia despite the fact that Washington is already spending much more that Moscow.

"NATO's combined military budget vastly outranks Russia's – with the US alone outspending Russia on its military by $609 billion to less than $85 billion. And yet, the Aerospace Industries Association, a lobby group for Lockheed Martin, Textron, Raytheon, and other defense contractors, argued in February that the Pentagon is not spending enough to counter 'Russian aggression on NATO's doorstep,'" Fang noted.

US defense officials and military commanders have repeatedly overhyped the non-existent threat from Russia, prompting an unnamed senior Pentagon officer to describe it as a "Chicken-Little, sky-is-falling" approach in an interview with Politico.

Russia's Latest Innovation Uses GSM Networks to Track Cruise Missiles, Drones
"These guys," he said, referring to the US Army, "want us to believe the Russians are 10 feet tall. There's a simpler explanation: The Army is looking for a purpose, and a bigger chunk of the budget. And the best way to get that is to paint the Russians as being able to land in our rear and on both of our flanks at the same time. What a crock."

Bonnie Kristian, a fellow at Defense Priorities, was also concerned that bureaucrats in the Pentagon are inflating the Russian threat to boost spending.

"The Pentagon budget should be dictated by the state of our national security – not the other way around. And here's hoping it doesn’t take war with Russia for Washington to figure that out," the analyst noted.