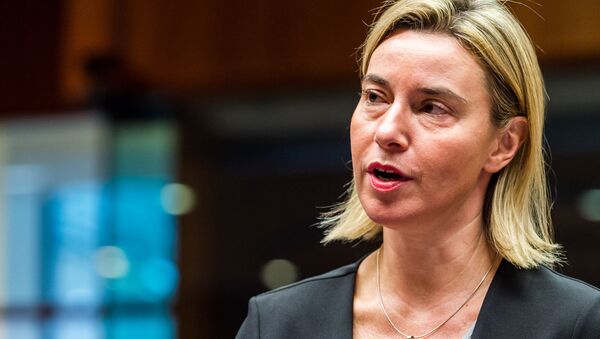 Ankara has confirmed its commitment to the implementation of the EU-Turkey migrant deal at a ministerial meeting in Bratislava, EU foreign policy chief Federica Mogherini said on Saturday.

EU Pledges to Help Turkey Fulfill Remaining Conditions for Visa-Free Regime
MOSCOW (Sputnik) — According to the deal agreed on March 18, Turkey pledged to take back all undocumented migrants who come ashore in Greece if EU countries receive Syrian refugees resettled from Turkish camps on a one-for-one basis.

The bloc also promised to accelerate the Turkish EU accession and introduce visa-free regime once Turkey meets the 72 conditions set by the bloc. Ankara has not fulfilled the five conditions that relate to data protection and anti-terror laws so far.

"Work is ongoing on all the agreements we have already started to work on in the last month in a constructive way. We have seen today a reaffirmation from the Turkish side to stick to the agreements we had, on particular on the management of the refugee flows, and from our side, on the visa liberalization, which is a separate issue," she told reporters.

In August, Turkish Foreign Minister Mevlut Cavusoglu warned that Ankara would scrap the EU-Turkey migrant deal if Turkish nationals were not granted visa-free access to the European Union's borderless Schengen area by mid-October.