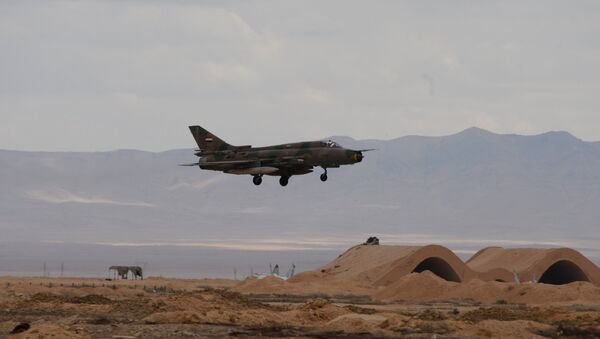 Everyone Wants Aleppo: First Success of Syrian Army in Two Weeks
According to Syrian news agency SANA, the Syrian military have conducted a number of operations in such provinces as Hama, Aleppo and Sweida, as well as Daraa, inflicting damage to various terrorist groups operating in those areas.

The largest number of raids occurred in the Hama province, where government forces have been carrying out attacks throughout the week.

On Thursday, Syrian jets destroyed a tank and several vehicles belonging to the Ajnad al-Sham and Jund al-Aqsa factions, killing 30 in the north of the province.

Earlier that day, government air forces struck Jaish al-Fatah and other groups. The attacks have seen some 50 terrorists killed and 70 wounded. A trove of equipment, including trucks armed with machine guns were destroyed as well.

A military source confirmed the death of Mohamed al-Ashqar, a head of Jaish al-Izza, a group included in the Free Syrian Army, in an aerial attack.

A convoy of vehicles on the western outskirts of Aleppo, one the country’s major cities, was destroyed in Syrian air attacks. However, officials did not specify the exact number of losses inflicted to the terrorist groups.

In attacks on Daesh in Sweida, the Syrian army destroyed a caravan of tanker trucks transporting oil in the south of the province, killing all fighters escorting the procession.

Sputnik Exclusive: ‘Russian Female Spy’ Causes Stir in Daesh Ranks
Daesh has been losing ground in Syria recently after its second-in-command, Abu Mohammed al-Adnani, was killed in a Russian airstrike that eliminated 40 militants earlier in the week.

Daesh is responsible for the deaths of thousands of Syrian civilians. A recent geographical survey discovered some 72 mass graves containing 5,200-15,000 victims of the violent extremists.