R-Sport Withdraws From the Paralympic Games in Rio 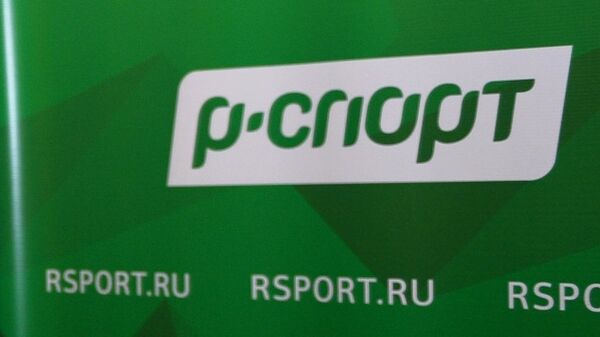 © Sputnik / Vladimir Pesnya
/
Go to the photo bank
Subscribe
Rossiya Segodnya's sports news agency will not send correspondents to the Paralympic Games in Rio in solidarity with the Russian athletes excluded from participating in the games. R-Sport will carry event results and photographs of the winners. The agency will also cover the alternative games scheduled for September 7-8 in the Moscow Region.

(MOSCOW) R-Sport — Instead of featuring stories on the Paralympic Games and the International Paralympic Movement, R-Sport will present Russian Paralympic champions from various years and their personal stories of triumph. R-Sport, the long-standing leader in covering sporting events for people with disabilities, including being designated the host agency for the 2014 Paralympic Games in Sochi, will thereby express solidarity with the excluded athletes and demonstrate that sports correspondents have no place at politicized sporting events.

R-Sport news agency head Vasily Konov: "Sports events at this level have always been a festivity and a triumph of will for athletes who have to face tremendous challenges. We were proud and happy to be the host agency at the Paralympic Winter Games in Sochi. We met with Mr. Philip Craven, president of the International Paralympic Committee (IPC), several times; he visited us at [our offices on] Zubovsky Boulevard. To our profound regret, the IPC decided to ban Russian Paralympic athletes from participating in the Rio Games.

The decision was based on a report that lacked facts or evidence, although the IPC could have emulated the IOC who had enough common sense to take the right approach. The situation being what it is, we are showing solidarity with our athletes, who remain at home. It makes no sense to be outsiders at a festivity that lacks its sports component and has become a politicized event. We respect everyone who will vie for gold at Rio; we wish every success to the athletes who will participate in the Paralympic Games but we will be watching from the sidelines."

Banning Russian Paralympians From Rio is 'Unfair, Inhumane Act' - Official
R-Sport news agency (http://rsport.ru/) was the host agency for the 2013 XXVII Summer Universiade in Kazan, the 2014 Olympic and Paralympic Games in Sochi, and the 2015 World Aquatics Championships in Kazan. In 2013, the agency was recognized as the best sports media outlet of the year at the Russian Ministry of Sport's national awards ceremony. The agency has also been awarded prestigious Russian prizes, including the Runet Prize 2012, the Parnassus of Sport Prize 2013, among others.

Rossiya Segodnya is an international media group whose mission is to provide prompt and balanced coverage of international events, and to inform its audience about different perspectives on key events. R-Sport is one of several information resources operating as part of Rossiya Segodnya, including RIA Novosti, RIA REALTY, Prime, RIA Rating, and INOSMI.

000000
Popular comments
Group responsibility, characteristic to the previous soviet system, became now yet another symbol of the praised western "values".

city-zen
2 September 2016, 10:57 GMT
000000
I would advocate to leave the West alone with Olympic games which have become obscene money making on the back of taxpayers anyhow. The other nations led by China and Russia should create games for the rest of the world where corporate interests are excluded and the true spirit of sport is in the foreground.
mzungu in Africa
2 September 2016, 13:06 GMT
000000
Newsfeed
0
New firstOld first
loader
LIVE
Заголовок открываемого материала
Access to the chat has been blocked for violating the rules . You will be able to participate again through:∞. If you do not agree with the blocking, please use the feedback form
The discussion is closed. You can participate in the discussion within 24 hours after the publication of the article.
To participate in the discussion
log in or register
loader
Chats
Заголовок открываемого материала
Worldwide
InternationalEnglishEnglishMundoEspañolSpanish
Europe
DeutschlandDeutschGermanFranceFrançaisFrenchΕλλάδαΕλληνικάGreekItaliaItalianoItalianČeská republikaČeštinaCzechPolskaPolskiPolishСрбиjаСрпскиSerbianLatvijaLatviešuLatvianLietuvaLietuviųLithuanianMoldovaMoldoveneascăMoldavianБеларусьБеларускiBelarusian
Transcaucasia
ԱրմենիաՀայերենArmenianАҧсныАҧсышәалаAbkhazХуссар ИрыстонИронауОssetianსაქართველოქართულიGeorgianAzərbaycanАzərbaycancaAzerbaijani
Middle East
Sputnik عربيArabicArabicTürkiyeTürkçeTurkishSputnik ایرانPersianPersianSputnik افغانستانDariDari
Central Asia
ҚазақстанҚазақ тіліKazakhКыргызстанКыргызчаKyrgyzOʻzbekistonЎзбекчаUzbekТоҷикистонТоҷикӣTajik
East & Southeast Asia
Việt NamTiếng ViệtVietnamese日本日本語Japanese俄罗斯卫星通讯社中文（简体）Chinese (simplified)俄罗斯卫星通讯社中文（繁体）Chinese (traditional)
South America
BrasilPortuguêsPortuguese
NewsfeedBreaking
14:03 GMTXi Urges SCO to 'Resist' External Meddling After US, Australia Vow to Bolster Ties With Taiwan
14:02 GMTUN Security Council Holds Meeting on Afghanistan
13:39 GMTHitting US Debt Ceiling Could Trigger Recession, White House Says
13:32 GMTUnited Airlines Briefly Grounded Flights in US, Canada Due to Computer Issues, FAA Says
13:29 GMTDutch Acting Defense Minister Resigns Over Kabul Evacuations Chaos, Reports Suggest
13:27 GMTFrance Says It Cannot Trust Australia in Trade Talks After Canberra Ditched Joint Sub Deal
13:20 GMTPiers Morgan Says His New Job Will Be 'Stuff of Nightmares' for Meghan Markle
13:18 GMTIndonesia Wary of Australia's Plans to Acquire Nuclear Submarines
13:14 GMTUS Slaps New Hezbollah-Related Sanctions on Several Individuals
12:57 GMTPakistan Will Get ‘Badly Burnt’ If It Courts the Taliban Beyond a Point, Warns Author
12:51 GMTUS General Mark Milley Reportedly Downplayed George Floyd Protests' Severity in Talks With Trump
12:51 GMTIs Narendra Modi Emerging as the Most Sports Loving Indian Prime Minister?
12:28 GMTFAA Bans Drone Flights Over Texas Bridge After Thousands of Haitians Filmed Flocking to Area
12:27 GMT'Show Got It Wrong': Priyanka Chopra Apologises After Taking Flak Over 'The Activist' Format
12:05 GMTNicki Minaj Tweet That COVID-19 Vaccines Cause Impotence Sparks Protest Outside CDC HQs - Video
12:01 GMTPelosi Asked After Capitol Riot If WH Staff Did Anything But 'Kiss' Trump's 'Fat Butt', Book Claims
11:48 GMTArmenian Police to Block Streets Near Central Square Due to Planned Rallies
11:32 GMTUK Military 'Actively Recruiting' New Spies for Deployment in Asian Region Amid AUKUS-Caused Waves
11:14 GMTPunjabi Activists Clash With Police in Delhi During Anti-Farm Law Protests - Video
11:07 GMTClip of Man With Crossbow on Balcony in Netherlands Emerges Online Amid Reports of Stabbing Attack