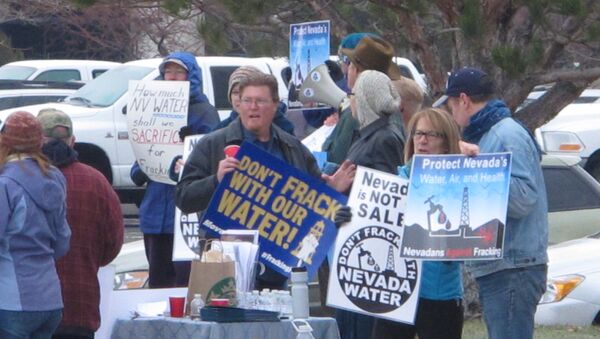 © AP Photo / Scott Sonner
Subscribe
International
India
Africa
A decision by the US Bureau of Land Management (BLM) to move public auctions of oil and gas leases to the internet is an attempt to dodge growing protests from environmental groups, WildEarth Guardians Senior Campaigner Rebecca Sobel told Sputnik on Friday.

WASHINGTON (Sputnik) — WildEarth was one of several groups protesting in the US state of New Mexico on Thursday when the BLM sold leases for 36 sites to energy companies.

Environmentalists Protest US Sale of Leases for Oil, Gas Production

"Moving oil and gas auctions online serves one purpose: to make it easier for the fossil fuel industry to take control of our public lands, shielded from public scrutiny and input," Sobel said.

On September 20, the BLM will hold its first auction online instead of requiring bidders to be physically present. Advocates for the decision to move the sales online argue that the internet will promote a more transparent bidding process.

End to Obama Admin Federal Land Leases to Oil, Gas Industry?
Sobel disagreed. "Public auctions provide the only opportunity in the lease sale process in which the public can engage with officials from the BLM directly," she explained.

Federal law gives the BLM responsibility for oil and gas leasing on about 564 million acres owned by the US government.

Since November 2015, the agency has postponed eight land auctions amid plans by environmental groups to protest. Environmentalists fear that Thursday’s auction will be the last public sale.

In January, the Obama administration announced a moratorium on leases to coal companies. Environmentalists argue that the United States will not be able to meet its commitments under the recent Paris climate accord without also ending leasing for oil and gas production.