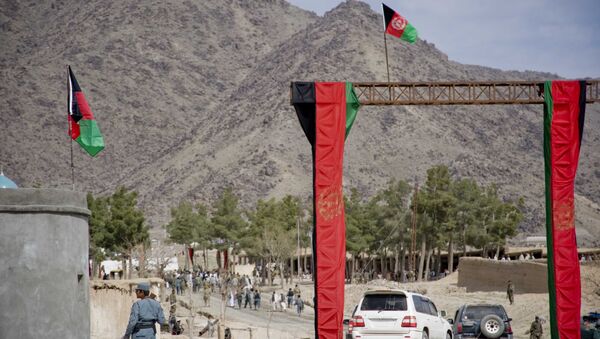 Afghan Foreign Minister Salahuddin Rabbani has paid an official visit to Iran to discuss a raft of hot-button issues, including closer security cooperation and a joint fight against terrorism.

Russia, Iran Concerned Over Deterioration of Situation in Afghanistan
During his talks in Tehran with his Iranian colleague Mohammad Javad Zarif, the Afghan foreign minister said that a stable and secure Afghanistan was a strategically important factor in bilateral relations, and prioritized regular consultations and information exchanges between the two countries.

Meanwhile, the security situation in Afghanistan keeps worsening with the eastern districts of Paktia province being besieged by Taliban and Daesh terrorists, and the strategic Khanabad district in the country’s northwestern Kunduz province changing hands in continuous firefights between government forces and jihadist terrorists.

The situation in western Afghanistan is equally worrisome with anti-Iranian Daesh forces posing a serious threat to Tehran, which is now recruiting local Afghan refugees to fight the terrorist organization.

In an interview with Sputnik, Iranian political analyst Pirmohammad Mollazehi underscored the all-importance of closer security exchanges between Iran and Afghanistan.

“A stable Afghanistan holds the key to stability and peace in this whole region. The country is being threatened by the Taliban, which is trying to put entire regions under their control, and by Daesh which, faced with a potential defeat in Syria and Iraq, could set its sights on Afghanistan, thus posing a serious threat also to Iran, Tajikistan, Uzbekistan and Kyrgyzstan,” Pirmohammad Mollazehi said.

He also said that the Daesh terrorists’ main goal is to establish an “Islamic Caliphate” that would spread from Russia’s North Caucasus all the way to India. Fully aware of this, Tehran and Kabul must work closer together to restore peace and security in the war-torn Afghanistan.

It is exactly with this understanding in mind that between 2011 and 2015 Iran donated $500 million to the Afghan government and is going to line up an additional $400 million before the end of this year.

The trade turnover between the two countries keeps growing and, according to Iranian Minister of Economic Affairs and Finance, Ali Tayebnia, is expected to reach $6 billion from $2.5 billion now.

Iran wants to build an oil refinery in Afghanistan with a daily capacity to 400,000 barrels of crude and is also ready to share its vast experience of fighting drug trafficking.

However, despite their traditionally close historical and cultural ties with Afghanistan, the Iranians certainly have other, less altruistic interests in the neighboring country.

First and foremost, Tehran wants a complete US military pullout from Afghanistan and an equal distribution of power between representatives of the country’s Pashtu and other ethnic groups.

Tehran’s other priority is to ensure the security of Afghan Shiites and prevention of any further escalation of tensions between the local Shiites and Sunnis.

Fighting Daesh terrorists and cracking down on drug traffickers is also a major priority.

All this means that closer across-the-board cooperation between Iran and Afghanistan, especially in fighting Daesh, will help enhance security and stability in Afghanistan and elsewhere in the region.