‘Upgrades Across the Board’: Pyongyang Poses Threat With New Weapons, Facilities 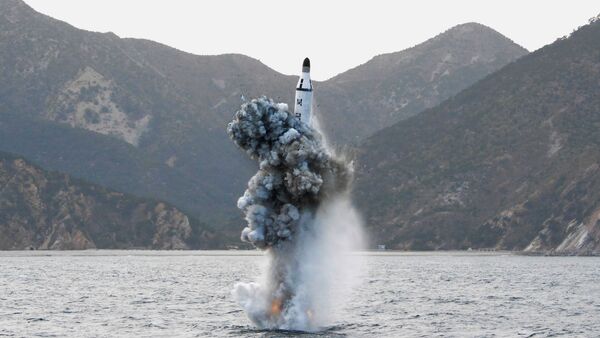 © REUTERS / KCNA
Subscribe
International
India
Africa
According to a US think tank, Pyongyang is making “serious resources available” for upgrading training facilities and weapon systems, and this increases the military threat posed by North Korea to the US and South Korea.

"The primary objective of the Korean People's Navy (KPN) is coastal defense of the nation. Its secondary missions include supporting special operations forces and Korean People's Army (KPA) wartime operations," according to 38 North, a US-based website that focuses on the DPRK’s military activities.

Images from commercial satellites indicate that these upgrades, taking place at the Munchon naval base, have been underway at least since 2014. Munchon is located in the city of Wonsan and is the largest naval base on the east coast of the DPRK.

Joseph Bermudez, who wrote the analysis for the US-Korea Institute at Johns Hopkins University's School of Advanced International Studies, told Stars and Stripes, "It appears that North Korea, at this point in time, is concentrating all of its naval sniper brigades on the east coast…Since Kim Jong Un has come to power, we see an upgrading across the board in North Korean military capabilities."

Bermudez’s analysis reported that ship-support facilities are being developed that have "remained relatively untouched" since the administration of Kim’s late father, Kim Jong Il. According to Bermudez this could increase the North Korean Navy’s coastal defense and its preparedness for open conflict with Seoul.

A panel of experts discussing the developments concluded that DPRK President Kim Jong Un is attempting to ensure that Pyongyang’s special operations forces and basic military capacities develop concurrently with its ballistic missile and nuclear capabilities.

There are at least 16 naval units at the Munchon base, and major developments underway at three, with one testing the anti-ship missile KH-35 and the "NONGO-class missile armed patrol craft."

The report cautioned, "Should the new KH-35 missile system be successfully integrated into the KPN [Korean People's Navy] and widely deployed, it would pose an increased threat to South Korean and U.S. Navy vessels in the region."

South Korean President Park Geun-hye told her military last month that any provocation from Pyongyang would lead to that regime’s "self-destruction." She said, "I call on you to maintain a robust posture to retaliate… to make sure that any attempt by the north at engaging in any form of provocations will lead to the self-destruction of the North Korean regime."

Even though this recent three-year chapter in the ongoing sixty-three year standoff between the Koreas ended in an armistice, the peninsula remains technically at war, as no peace agreement was signed following the end of the Korean War, in 1953.