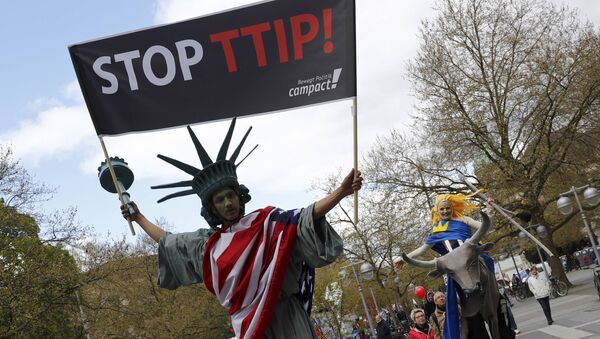 The Transatlantic Trade and Investment Partnership (TTIP) may fall a victim of tensions between the United States and Europe, unprecedented since the end of World War II, an article in the Financial Times read.

In addition, the European Commission alleged that Apple had benefited for 20 years from illegal tax breaks in Ireland. Brussels concluded that the company should pay up to €13 billion in taxes.

Thus, Europe’s biggest economies are turning away from the ambitious deal with the US.

Meanwhile, the TTIP faced troubles back in 2015. Last October, the European Parliament said that two years after the talks started the "negotiators have shied away from addressing real substance or tackling difficult issues," the article read.

There are two additional factors that have had a negative impact on the deal. The first factor is the electoral cycle in the US and Europe.

“The governments of Germany, France and Italy changed their stance towards the TTIP due to public opinion in the countries ahead of elections,” Daniil Kirikov, managing partner at the Kirikov Group, told Vzglyad.

"When leaks about the document were published public support for the TTIP dropped from 50 to 15 percent. Thus, it had a negative effect on electoral ratings. Representatives of the ruling parties realized that if they supported the deal they wouldn’t win elections," Kirikov explained.

TTIP to Bring No Advantages to People as Economic Promises Baseless
The second factor is Britain’s withdrawal from the EU, according to the Financial Times.

"At one stroke, this [Brexit] turned the talks upside down by removing from the equation the EU’s largest, most consistent supporter of a much expanded transatlantic economic relationship," the article read.

But the potential failure of TTIP is only part of souring ties between Washington and Brussels. Officials and politicians on both sides of the Atlantic have accused each other of protectionism and populism. In addition, many in Europe are complaining that the EU suffers from Western sanctions against Russia, according to the article.

"Unless the US and Europe find mutually acceptable solutions to these and similar problems, more will be at stake than trade, investment and jobs. Ultimately, the accumulating transatlantic disunity will threaten the liberal, post-second world war global order on which the West’s prosperity and security have rested so heavily," the article read.

The TTIP deal has been one of the most ambitious US foreign policy projects during Barack Obama’s presidency. Now, the US and EU may not agree on the deal before the end of 2016.

The European Commission has been in talks over TTIP with the US by a mandate issued by the EU Council.

"In order to halt the talks, France has to initiate the cancellation of the mandate in the Council. The decision must be approved by at least 55 percent of the Council members who represent at least 14 EU countries with 65 percent of the EU population. In addition, only four or less country members can vote against," Kirikov explained.

According to the expert, if Germany, France and Italy reach a consensus against TTIP this could almost guarantee that the talks will be stopped.

"In order to continue the talks, the US could pressure certain countries, especially in Eastern Europe, like Poland, Latvia and Estonia. If Washington persuades at least five EU countries to support the deal the vote will fail," Kirikov said.

Statements by European politicians make clear that the deal proposed by the US will not be beneficial for Europe.

European Civil Organizations Fear TTIP Talks May Revive
The text of the agreement has not been made public and the talks have been secretive. But some leaks have been made in media over the past two years. They revealed that the US wants Europe to adopt American business norms and standards. In turn, Brussels wants to preserve its own standards. The ultimate goal of the US is to get access to the European market for American goods, including GMO products which are banned in the EU.

"Now it is clear that the TTIP will not become real in the near future. At least, the establishment of a common US-European market will be delayed. At the same time, movements for national sovereignty and protectionism are on the rise on both sides of the Atlantic. TTIP may not get a second chance. This means a big problem in Washington’s globalization plans," an article in Vzglyad read.