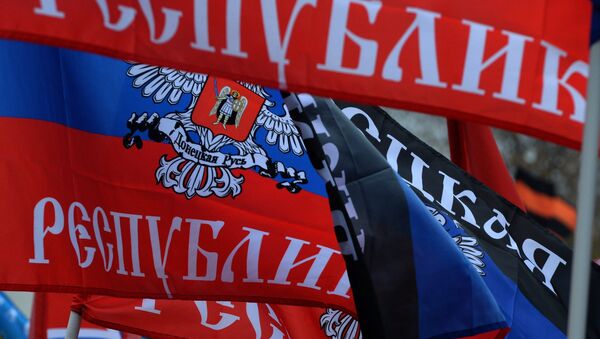 © Sputnik / Mikhail Voskresenskiy
/
Go to the photo bank
Subscribe
The representative office the Donetsk People’s Republic (DPR) has opened in Ostrava in the Czech Republic and was accompanied by protests, a RIA Novosti correspondent reported on Thursday.

New Ceasefire Regime in Donbass Generally Holding - Donetsk Republic
DONETSK/OSTRAVA (Sputnik) — A small group of people were waving Ukrainian and EU flags in protest against the office's opening. The DPR representative office is located near the Russian Honorary Consulate at Sokolska Street in Ostrava.

Earlier in the day, the Foreign Ministry of the Czech Republic also voiced protest against the office's opening, saying that the DPR could not have any kind of diplomatic mission in the country, as Prague does nor recognize it as a state and therefore no diplomatic relations can be established between the sides.

Kiev launched a military operation in Ukraine's southeast in April 2014 against pro-independence militia in the self-proclaimed Donetsk and Luhansk people's republics, after local residents refused to recognize the new government in Kiev that they viewed as illegitimate. Despite the Minsk peace accords signed in February last year by the warring sides, they continue to blame each other for ceasefire violations.