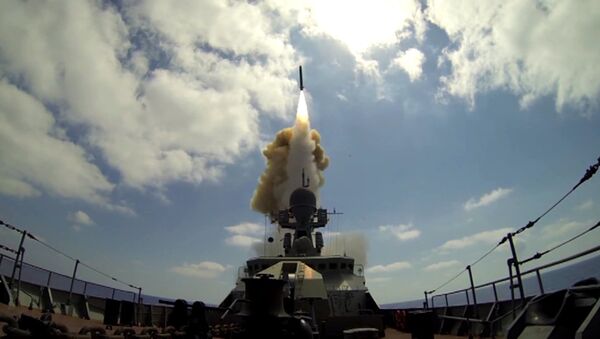 © Photo : Ministry of defence of the Russian Federation
/
Go to the photo bank
Subscribe
India plans on purchasing the Kalibr cruise missiles from Russia, according to Izvestia newspaper, quoting a diplomatic source. It is a significant step in boosting Indian-Russian cooperation. Sputnik spoke to President of the Indian Business Alliance Sammy Kotwani.

Recent years have witnessed rapid growth in all aspects of bilateral partnership. In spite of Russia being India's main trading partner in the military and technical sphere, Moscow and Delhi are also close allies in the spheres of science, culture and ecology.

“All Indian people know that Russia has been our best friend. After Vladimir Putin became the president of Russia, the friendship has been taken to greater heights,” Kotwani said.

India Launches Domestic Design Bureau to Cut Imports of Arms and Ammo
He further said that the partnership started in 1990 when Indian Prime Minister Atal Bihari Vajpayee came to Russia.

“India is a country with all the human resources and Russia is the most powerful country. When you talk about arms and ammunition, it is the world leader and its support will make all the difference.”

“If this partnership grows the way it is growing, I am sure in the future with the support of Russia, India will be in the second league and we will be there for the peace of the world,” Kotwani said.

The president of the business alliance further spoke about the recent deal that was struck between India and Washington that would allow the US ships to refuel at its bases.

“Today in the world there is not one country that can state what should be done or what shouldn’t be done. We Indians are the most peace loving people, we have never harmed anybody and we won’t allow other countries to do so either,” Kotwani said.

He expressed hope that no matter what other people say, it won’t spoil relations between India and Russia.

“Nothing can spoil Russian-Indian relations, they will last forever,” Kotwani said.

He further spoke about tourism to Russia, saying that according to him the process of visa application to visit Russia is really complicated.

Kotwani further spoke about how he first visited Russia in 1990 and how "the country was born in front of him."

He also added that Russia has changed for the better in the last 26 years and according to him it is the best country to be in right now.