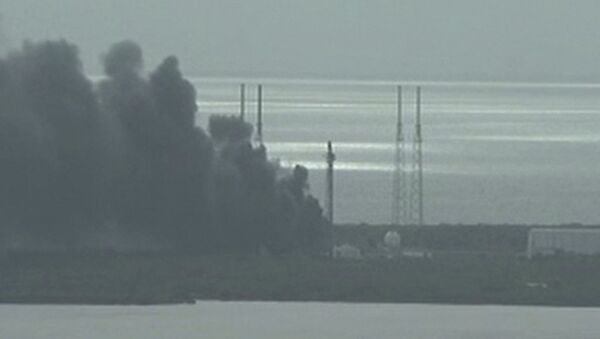 SpaceX’s Falcon 9 rocket exploded on the launch pad at their facility at Cape Canaveral in the US state of Florida, according to reports.

​The US National Aeronautics and Space Administration (NASA) posted a picture of black smoke rising from the SpaceX launch complex.

The @SpaceX Falcon 9 just exploded at their Launch Complex at Cape Canaveral.

​SpaceX was conducting a test firing of its unmanned rocket when the blast occurred Thursday morning.

The rocket is currently in flames. Staffers at the facility are telling me. Plumes of smoke rising from Launch Complex.

​Witnesses say the rocket exploded while sitting on the launch pad.

​​Falcon 9 was scheduled to take off on Saturday to deliver Facebook's first satellite into orbit.

I hope everyone is OK at #SpaceX. pic.twitter.com/HFN5jiGDDf

The explosion on a launch pad during the test of a SpaceX rocket at Cape Canaveral, Florida is not a threat to the public, the Brevard County Emergency Management Office said on Thursday in a Twitter message.

A view of the smoke at the Cape after explosion of #SpaceX rocket. pic.twitter.com/rmop2tdbyt

"There is no threat to general public from catastrophic abort during static test fire at SpaceX launch pad at CCAFS this morning," the message stated.

Buildings several miles away shook from the blast, and multiple explosions continued for several minutes, AP reported. A cloud of dark smoke filled the overcast sky.

Explosion from #SpaceX rocket can be seen on radar. pic.twitter.com/Bu7NYmz9zo

An anomaly on the launch pad during a test of the Falcon 9 rocket which was scheduled to launch on Saturday at Cape Canaveral, Florida resulted in an explosion which destroyed the rocket and its payload, SpaceX said in a statement on Thursday.

"SpaceX can confirm that in preparation for today's static fire, there was an anomaly on the pad resulting in the loss of the vehicle and its payload," the statement noted. "Per standard procedure, the pad was clear and there were no injuries."