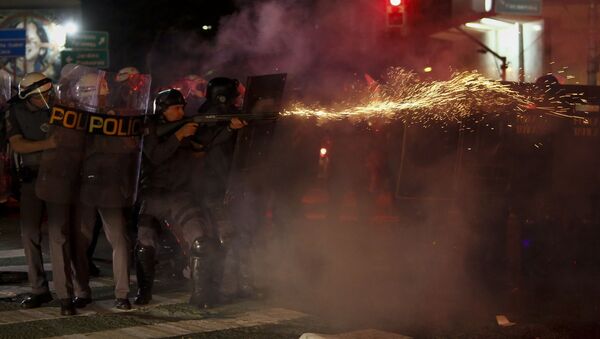 Demonstrators protesting against the impeachment of Brazilian President Dilma Rousseff have clashed with police in the city of Sao Paulo, local media report.

​The demonstrators have blocked a road with trash bags, setting them on fire.

Crazy to land in São Paulo, Brazil on the day a coup is completed. Peaceful protestors have shut down some major streets. Riot cops have been deployed. Good to be here to stand with the people.

Earlier on Wednesday, Brazil’s former vice president Michel Temer was sworn in as the country’s new leader after the Senate voted to remove Rousseff from her presidential post.

​In May, the upper house of the Brazilian parliament voted 55-22 to start impeachment proceedings against Rousseff after she was accused of concealing the country’s budget deficit ahead of the 2014 election. Rousseff was suspended from office for 180 days. Michel Temer, who had been Brazil's vice president since 2011, assumed presidency during that period.

​Temer will now serve as Brazil's president until 2019, when new elections will take place.