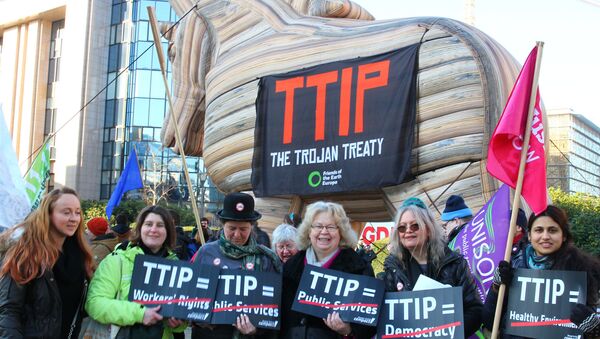 © Flickr / greensefa
Subscribe
The US-EU TTIP deal will not bring any advantages to people as all the promised economic benefits do not rely on real state of affairs, Klaus Ernst, a member of the German parliament's Committee on Economic Affairs and Energy from the opposition Die Linke party told Sputnik on Wednesday.

MOSCOW (Sputnik) — On Wednesday, Austrian Vice-Chancellor Reinhold Mitterlehner said TTIP talks should be halted, echoing similar suggestion by French Trade Minister Matthias Fekl, who on Tuesday promised to request a halt to TTIP talks at next month’s EU trade ministers’ meeting in Bratislava. The skepticism regarding TTIP was fully shared by German Economy Minister Sigmar Gabriel, who declared over the weekend that the talks were "de facto dead."

"Die LINKE doesn't see any advantages in TTIP for the majority of the people: All the promises concerning economic growth or more jobs do not base on any reliable facts," Ernst said.

He added that the TTIP implementation would likely lead to investor claims, a limited regulation right by the elected governments and further deregulation at the expense of environmental and consumer protection.

European Civil Organizations Fear TTIP Talks May Revive
"The US side is not willing (and, regarding the 'buy American'-clauses on the federal level, legally not in the position) to grant access to the public procurement sector to the EU enterprises. Since there is no progress in this major aim of the EU, the whole negotiation seems blocked," Ernst mentioned one of the stumbling blocks in the sides' positions.

He added that Germany needed a deal for high common standards and an international agreement on how to organize trade on a fair and transparent basis. "But this is not TTIP," he concluded.

The negotiations on the trade deal between Europe and the United States, that stipulates the free trade zone between the two regions and that is set to be finalized before the end of the year, have been going for the last three years, but 14 rounds of talks have not brought any result.

000000
Popular comments
TTIP means, to MAKE AMERICA GREAT AGAIN> OR RELIVE U.S GLORY DAYS. This is NOT about E.U and FORGET about it's citizen's. Is about create HEGEMONY, on the face of IDIOTS. Like ENGLISH on EVERYTHING is about revive U.S GLORY DAYS. LOST right after everyone saw beyond the LIES and PROPAGANDA. U.S involvement in Europe war was to take Europe away from Russia.. And NOTHING else. Since the 50's the reverse clock began. Just like China's reverse clock is already in motion. They so DESPERATE, that China is to partner with Ukraine to build the AN 225 ... Hey thanks GORBACHEV and YELTSIN for that one. Russia had some investment lost. It could SUE to get the plane out.. Knocking KIEV on the head? PRICELESS.
cast235
1 September 2016, 03:09 GMT2
000000
An agreement on how to to organizing trade on a fair and transparent basis makes since. Complex trade agreements are more likely to benefit special interest and less likely to benefit working people in all nations involved, and make it more difficult for nations to have control over their own markets in the long run.
Darrell R
1 September 2016, 04:02 GMT
000000
Newsfeed
0
New firstOld first
loader
LIVE
Заголовок открываемого материала
Access to the chat has been blocked for violating the rules . You will be able to participate again through:∞. If you do not agree with the blocking, please use the feedback form
The discussion is closed. You can participate in the discussion within 24 hours after the publication of the article.
To participate in the discussion
log in or register
loader
Chats
Заголовок открываемого материала
Worldwide
InternationalEnglishEnglishMundoEspañolSpanish
Europe
DeutschlandDeutschGermanFranceFrançaisFrenchΕλλάδαΕλληνικάGreekItaliaItalianoItalianČeská republikaČeštinaCzechPolskaPolskiPolishСрбиjаСрпскиSerbianLatvijaLatviešuLatvianLietuvaLietuviųLithuanianMoldovaMoldoveneascăMoldavianБеларусьБеларускiBelarusian
Transcaucasia
ԱրմենիաՀայերենArmenianАҧсныАҧсышәалаAbkhazХуссар ИрыстонИронауОssetianსაქართველოქართულიGeorgianAzərbaycanАzərbaycancaAzerbaijani
Middle East
Sputnik عربيArabicArabicTürkiyeTürkçeTurkishSputnik ایرانPersianPersianSputnik افغانستانDariDari
Central Asia
ҚазақстанҚазақ тіліKazakhКыргызстанКыргызчаKyrgyzOʻzbekistonЎзбекчаUzbekТоҷикистонТоҷикӣTajik
East & Southeast Asia
Việt NamTiếng ViệtVietnamese日本日本語Japanese俄罗斯卫星通讯社中文（简体）Chinese (simplified)俄罗斯卫星通讯社中文（繁体）Chinese (traditional)
South America
BrasilPortuguêsPortuguese
NewsfeedBreaking
05:14 GMTOver 50 London Police Officers Deployed to Oxford Street After Reports of Gunman - Video
04:30 GMTNot My Style: Adorable Golden Retriever Doesn't Like Wearing Shoes
04:26 GMTLive Updates: India Registers 30,773 New COVID-19 Cases
03:52 GMTMeghan Markle Wears Earrings Made of Same Diamonds That Decorate Her Mysterious Pinky Ring - Report
03:12 GMTIsraeli Security Forces Capture Last Two Fugitives Who Escaped From Gilboa Prison, IDF Says
03:10 GMTFrench Blindsided as AUKUS Details Were Discussed at G7 Summit Leaving Macron Out - Report
02:25 GMTBiden Administration Worried High-Level UN Meetings Will Become COVID-19 ‘Superspreader’ - Report
01:40 GMTKhamenei Pledges Support to Iranian Athletes Who Refuse to Compete With Israelis
01:25 GMTAOC Met Gala Dress Designer Owes Multiple Taxes for Withholding Worker Benefits, Income Checks
YesterdayFrance’s FM Says Aware of UK's ‘Permanent Opportunism’, Calls BoJo ‘Fifth Wheel’ in AUKUS
YesterdayMayor of Johannesburg Killed in Car Accident - Reports
YesterdayPython Falls From Rooftop in Australia After House Sheathed From Snakes - Photos
YesterdayWatch: SpaceX Capsule With All-Civilian Crew Splashes Down in Atlantic
YesterdayReport: Iran's Top Nuclear Scientist Was Killed by Weaponized Robot in Long-Planned Operation
YesterdayFour Arrested at 'Justice for J6' Rally, No Clashes With Counterprotesters
YesterdayAfghan Human Rights Commission Says Unable to Work Due to Taliban Interference
YesterdayFacebook CEO Zuck's Vax Promo Scheme Became 'Cesspool' of Misinformation, Minions Warn - Report
YesterdayUS Air Force Reveals Conditions to Lift Decades-Long Ban on F-22 Raptor Exports
YesterdayOrganiser of 'Justice for J6' Rally in Calls on Protesters to Respect Law Enforcement, Media
YesterdayLion's Den vs Bunch of Kittens: Ex-Trump Press Sec Spicer Sad Because Reporters Treat Psaki Better