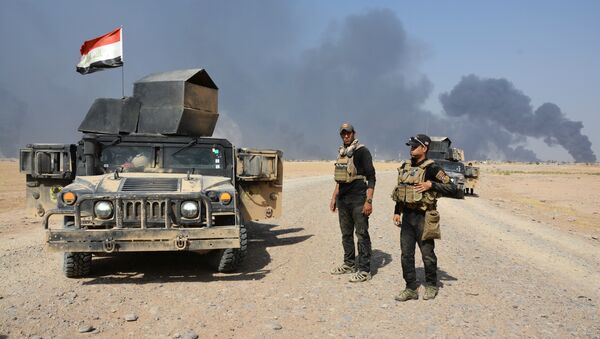 © REUTERS / Stringer
Subscribe
On Tuesday, Daesh terrorists reportedly sewed up the mouths of four Mosul residents with metal wire for discussing the success of Iraqi Army in the offensive anti-terrorist operations among themselves.

Made in America: State Dept. Offers $3Mln For Daesh Leader Trained in US
A local resident of Mosul told Sputnik, that Daesh has spies around town who report on citizens who talk about the victories of the Armed Forces of Iraq. Anyone caught discussing the ‘enemy' is punished in public. The militants are seriously concerned by the growing belief amongst the public that Mosul is on the brink of liberation after a series of failures by Daesh in other cities around the country.

"Four of our residents were discussing the success of the army in a casual conversation about politics, when another man suddenly joined in. He casually discussed with them the defeat of Daesh and offensive operations in Nineveh. Later, all four people were caught. Right where they were standing, their mouths were sewn up with metal wire," said the resident, whose name has not been disclosed for obvious security reasons.

The terrorists put their victims into the open trunk of a car, showing their sewn up mouths to everyone, in an attempt to intimidate the population and prevent and talk of the victories of the government troops and the people's militia.

At the same time, a local source in Hit, a city in Al-Anbar province, told Sputnik about the execution of two civilians, who secretly helped families to escape from Daesh-controlled areas on the outskirts of the city.

Russian Su-34 Bombs Daesh Meeting, Killing Up to 40 Fighters in Syria's Aleppo
Militants prohibit the local population from leaving the cities captured by them. The residents are used by Daesh as human shields. The presence of civilians in Daesh-controlled cities significantly complicates the military operations for the liberation of each territory, as the militants hide in the homes of civilians.

Iraqi forces are also carrying out operations in the Nineveh governorate in preparation for an assault on Mosul, Iraq's second-largest city that has been under Daesh control since 2014.