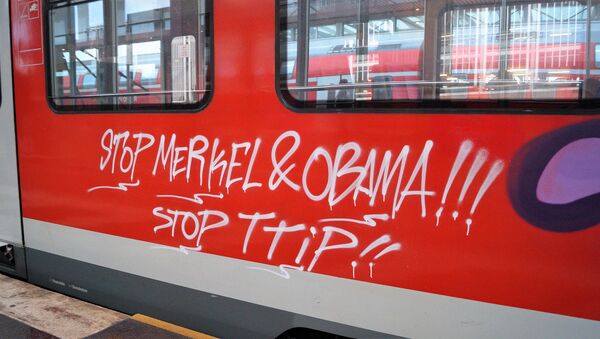 French Trade Minister Calls for Halt to TTIP Trade Deal Talks
MOSCOW (Sputnik) — The US-EU talks on the Trans-Atlantic Trade and Investment Partnership (TTIP) agreement are making steady progress, a spokesperson of US Trade Representative Michael Froman said on Tuesday, following recent remarks of some European top officials on the failure of negotiations.

On Sunday, Germany's Vice Chancellor and Economy Minister Sigmar Gabriel said that Brussels and Washington could not reach an agreement on TTIP due to EU concerns over the deal's possible adverse effects. He was followed by French Foreign Trade Minister Matthias Fekl who announced on Monday France's intention to make a halt in the talks.

The negotiations are in fact making steady progress, Froman's spokesperson told Der Spiegel newspaper and confirmed US intention to review agreements reached so far at the September talks over the issue.

The US government has started the discussions over the free trade zone with the European Union in 2013. The details of the TTIP deal including specific rules of market access have not been released the public.