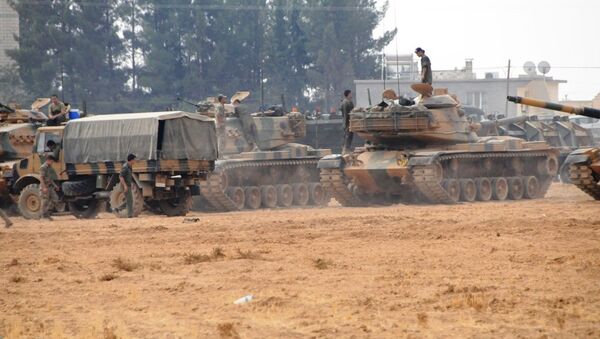 © Photo : Hikmet Durgun
Subscribe
International
India
Africa
US Secretary of Defense Ashton Carter has called upon Ankara and the Kurdish-led Syrian Democratic Forces (SDF) to not fight with one another and to keep "those geographic commitments that they've made."

During a Monday joint press conference with Indian Minister of Defense Manohar Parrikar in the Pentagon, Carter emphasized that the US "very much appreciate[s] the efforts" of both Turkey and the Kurdish-dominated SDF in their combat against Daesh terrorists in Syria.

"They both made material contributions.  We've worked with both of them.  And all of our interactions are intended to keep that going.  So yes, we have called upon Turkey to… stay focused on the fight against ISIL [Daesh] and not to engage Syrian Defense Forces [Syrian Democratic Forces]," Carter said.

Two Birds With One Stone: US 'Sacrifices' Its Kurdish Allies in Syria
"The United States was very supportive and is very supportive of their [Turkey's] general counter-ISIL activities and everything they did to secure the area between the border and Jarablus, and then westward, but not south of Jarablus, nor to engage the Syrian Defense Forces [Syrian Democratic Forces]," he repeated.

On the other hand, Carter emphasized, the Kurdish People's Protection Units, which constitute a considerable portion of the SDF, should in their turn withdraw their forces east of the Euphrates.

"So we've called on both sides to not fight with one another, to continue to focus the fight on ISIL.  That's the basis of our cooperation with both of them.  And specifically, not to engage one another and to retain those geographic commitments that they've made," Secretary Carter underscored.

Carter told journalists that Chairman of the Joint Chiefs of Staff General Joseph Dunford discussed the issue with his Turkish counterpart on August 28 and asserted that he himself will turn the spotlight on the matter next week, during his meeting with Turkish Defense Minister Fikri Isik in Europe.

The remarks come after a series of clashes between the Turkish Armed Forces and the Kurdish militants over the weekend.

'Euphrates Shield': Turkish Operation to Reshape Balance of Power in Syria
Alex MacDonald of the Middle East Eye notes that despite Carter's pledge to calm the tensions simmering between its allies in the region things are getting messier by the minute in northern Syria.

Citing Turkish President Recep Erdogan, the journalist calls attention to the fact that Ankara has signaled clearly that the YPG would be a target of Turkish military operations in Syria.

The Turkish government regards the Democratic Union Party (PYD) and its military wing, the YPG, as "terrorist" entities linked to the Kurdistan Workers' Party (PKK), outlawed in Turkey.

"Our operations will continue until Daesh, PKK [Kurdistan Workers' Party] and its Syrian affiliate PYD are eliminated as threats against our citizens," Erdogan said Monday as quoted by Anadolu Agency.

Remarkably, on August 29 Brett McGurk, US Presidential Envoy for the Global Coalition to Counter ISIL (Daesh), tweeted that Washington regards the clashes between the Turkish Armed Forces and the Kurdish militants — in areas where Daesh is not located — as "unacceptable and a source a deep concern."

DOD: We want to make clear that we find these clashes — in areas where #ISIL is not located — unacceptable and a source of deep concern.

Hillary Clinton-Backed 'No-Fly Zones' Taking Shape in Syria
For their part, the SDF and YPG "put out mixed reactions" to the escalation of tensions in northern Syria, MacDonald continues, adding that some of the SDF pro-YPG units, including the Arab-majority Jaish al-Thuwwar, signaled their intention to challenge the "Turkish occupation."

But that's half the trouble. MacDonald says that following US Vice President Joseph Biden's warning that the Kurdish forces would lose Washington's support if they refused to return to the eastern bank of the Euphrates. YPG spokesperson Redur Xelil claimed that the Kurdish fighters "will not act in line with the request of Turkey or some other power."

"Our forces are part of the SDF [Kurdish-led Syrian Democratic Forces] and we insist on our mission and goal. We won't listen to the demands of Turkey or powers outside of Turkey. Turkey cannot impose its own agenda, its own interests on us. Our forces are there. We will not withdraw from west of the Euphrates. No one has the right to ask the YPG to leave the area," Xelil told Radio Voice of America last Thursday as cited by Ekurd.net.

Washington is on the horns of a dilemma, expert in Middle Eastern affairs Leonid Isaev of the Higher School of Economic told Svodobnaya Pressa last Friday.

The expert suggested that the US would divide the Syrian northern region into "spheres of influence" in order to prevent large-scale clashes between their allies in the region.

Carter's urging that the allies to retain their "geographical commitments" in northern Syria shows that Isaev's prognosis may come true.