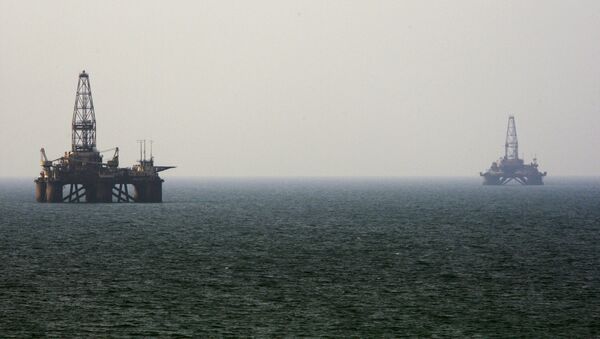 © Sputnik
/
Go to the photo bank
Subscribe
Over the weekend, Russia signed a deal with Iran to build $1 billion worth of offshore drilling rigs. Speaking to Sputnik, a Russian Iran expert and officials from the Russian and Iranian firms involved in the oil rigs deal commented on the prospects for Russian-Iranian economic cooperation, which in their words, is only just beginning.

On Saturday, Iranian and Russian media reported that Russia's Krasnye Barrikady Shipyard had signed a $1 billion deal with Iran's Tasdid Offshore Development Company, part of Sadid Industrial Group, to build five offshore drilling rigs for use in the Persian Gulf.

Under the deal, the rigs' components, to be built in Russia's Astrakhan region, will be shipped to the southwestern Iranian city of Khorramshahr, where they will be assembled with the help of Russian experts before being deployed in the Gulf. Iranian specialists are expected to participate in the rigs' construction. The rigs are expected to be built over the next two years.

Russia, Iran Sign Deal Worth $1Bln to Build Offshore Drilling Rigs for Tehran
Commenting on the growing cooperation between the two countries, Russian Middle East specialist Vladimir Sazhin told Sputnik that since the signing of the Iranian nuclear deal in July 2015, Tehran has quickly become a key player in regional and even global politics, and an economic powerhouse to boot.

Accordingly, Russia is interested in the development of a long-term partnership with Tehran, and in as short a timeframe as possible. The ties, Sazhin said, must be made firm enough to be able to withstand any political fluctuations in either country and in the region as a whole.

In early August, the presidents of Russia, Iran and Azerbaijan met in Baku. A great deal of time was devoted to cooperation in the oil and gas sector, with Vladimir Putin and Hasan Rouhani specifically commenting on the 'special impetus' that had been given to the development of relations in this sector.

As a result, several weeks later, Russia's Krasnye Barrikady Shipyard and Iran's Sadid Industrial Group signed a contract on the creation of offshore oil rigs. The contract has quickly grown to become among the largest economic projects agreed to between Moscow and Tehran since the signing of the Iran nuclear deal and the lifting of international sanctions against Tehran last year.

Speaking to Sputnik about the deal, Krasnye Barrikady deputy general director Viktor Nikolaev pointed out that the Russian shipyard has maintained warm relations with the Sadid Group for quite a long time before the deal was actually reached. It was the Iranian company that sought out Krasnye Barrikady, "when they were looking for the opportunity to build floating drilling rigs in the Persian Gulf," the company official said.

Having toured several other Russian shipyards, Sadid settled on the Astrakhan company. "And their decision is easy to explain," Nikolaev explained. "Our enterprise has built 12 floating drilling rigs, 8 of them in the Caspian Sea, for Azerbaijan, 2 in the Black Sea, on Ukraine's request, and one for [Russia's] Lukoil, located in the Caspian and successfully exploring and producing oil since 1995. Several years ago, we completed a floating drilling rig for the Chinese company Yantai CIMC Raffles, operating in the Caspian. In other words, we have a great deal of experience."

Strategic Cooperation in Action: S-300s Deployed to Defend Iran's Peaceful Atom
Sadid Group officially approached Krasnye Barrikady in December 2015, at a Russian industrial exhibition in Tehran. It was there, Nikolaev said, that the two companies signed a memorandum exploring the possibility of building the rigs.

Each platform is expected to cost around $200 million, which, as Nikolaev pointed out, was a fair price for rigs of this kind. But the Iranian side is attracted to more than just the cost of the project. Speaking to Sputnik, Sadid Industrial Group deputy director Amir Hossein Kaveh explained that the quality of the platforms and the contractor used for their assembly was also an important issue.

"Our company is the largest industrial holding in Iran. We have been in business for over 50 years, and have carried out a wide variety of government projects. Our holding includes 10 of the largest enterprises specializing in pipes and sections, wind turbines and generators, pumps and new forms of energy."

Kaveh explained that after receiving the state order to build the new rigs, Tasdid, a member of the Sadid Group, would consider companies from several countries for the construction and assembly of the platforms. "In the course of the search, the Krasnye Barrikady shipyard attracted special attention, given its rich and, most importantly, successful experience in the industry – comprising over a hundred years, and its specialization in building vessels, jack-up drilling rigs, support blocks, and fixed drilling platforms."

Three Reasons Why Russia, Iran and Turkey Should Foster Political, Military Ties
Ultimately, Kaveh said that he expects the remaining nuances of the deal to be ironed out within the next two months, after which the two companies begin actual construction. Under the deal, Iran will receive not only the rigs themselves, but the technologies associated with their construction.

Accordingly, the official suggested that the contract with the drilling rigs was one more sign demonstrating the long-term strategic character of Russian-Iranian cooperation.

Broadly speaking, he noted, "one of the long-term objectives as far as Iran's economy is concerned is to see the largest industrial enterprises from our country become engaged in cooperation with major Russian companies and enterprises, accompanied by the conclusion of a wide variety of agreements and contracts. Russia, at the highest political level, has also shown an interest in this. And hopefully, this mutual interest will soon enter the phase of practical implementation."

In the next 2-3 months, representatives from dozens of Iranian companies are expected to make a working visit to Russia. "Taking into account the agreements which have already been reached by the heads of the Central Banks of our countries on providing financial support for a number of projects, we should see the implementation of these projects in the near future," Kaveh concluded.

Tehran Allocates Funds for Bushehr-2 Nuclear Plant Project
Last month, Iranian Ambassador to Russia Mehdi Sanai pointed out that Russia and Iran have already inked contracts on economic cooperation worth a total of $40 billion. This, according to the ambassador, includes "six new reactors at the Beshehr plant," (with the contracts already signed and funds allocated for two of them). "In addition, Russia will be building four thermal power plants in Iran, and upgrading existing ones, and an agreement has been reached on railways. Other agreements cover a wide range of areas, including industry, mining, aerospace, heavy and light automotive, aeronautics, oil and gas, petrochemicals, agriculture, etc."
000000
Newsfeed
0
New firstOld first
loader
LIVE
Заголовок открываемого материала
Access to the chat has been blocked for violating the rules . You will be able to participate again through:∞. If you do not agree with the blocking, please use the feedback form
The discussion is closed. You can participate in the discussion within 24 hours after the publication of the article.
To participate in the discussion
log in or register
loader
Chats
Заголовок открываемого материала
Worldwide
InternationalEnglishEnglishMundoEspañolSpanish
Europe
DeutschlandDeutschGermanFranceFrançaisFrenchΕλλάδαΕλληνικάGreekItaliaItalianoItalianČeská republikaČeštinaCzechPolskaPolskiPolishСрбиjаСрпскиSerbianLatvijaLatviešuLatvianLietuvaLietuviųLithuanianMoldovaMoldoveneascăMoldavianБеларусьБеларускiBelarusian
Transcaucasia
ԱրմենիաՀայերենArmenianАҧсныАҧсышәалаAbkhazХуссар ИрыстонИронауОssetianსაქართველოქართულიGeorgianAzərbaycanАzərbaycancaAzerbaijani
Middle East
Sputnik عربيArabicArabicTürkiyeTürkçeTurkishSputnik ایرانPersianPersianSputnik افغانستانDariDari
Central Asia
ҚазақстанҚазақ тіліKazakhКыргызстанКыргызчаKyrgyzOʻzbekistonЎзбекчаUzbekТоҷикистонТоҷикӣTajik
East & Southeast Asia
Việt NamTiếng ViệtVietnamese日本日本語Japanese中国中文Chinese
South America
BrasilPortuguêsPortuguese
NewsfeedBreaking
19:46 GMTWHO: Data Insufficient to Conclude Omicron More Dangerous Than Delta
19:02 GMTUS Reportedly Sends Two Military Convoys to Syria Consisting of Over 100 Vehicles
18:24 GMTTaiwan Scrambles Jets to Fend Off 27 Chinese Military Aircraft
18:09 GMTBelarusian Security Council Says Kiev Stirring Up Migration Issue to Get Money From West
18:03 GMTPresident Ramaphosa Delivers Speech on South Africa's COVID Fight Amid Spread of Omicron Strain
17:52 GMTSouth African Doctor Says 'Mild' COVID-19 Variant Omicron Already 'Seeded' in UK
17:38 GMTPoll: Kamala Harris & Michelle Obama Dems' Top Choices for 2024 Race If Joe Biden Decides Not to Run
17:27 GMTHunter Biden Received 3-Carat Diamond on Top of $10M a Year Deal With Chinese Businessman, Book Says
17:17 GMTWill the Maxwell Trial Expose Epstein's Rich & Powerful Friends or Turn Into Another Cover-Up?
17:12 GMTSouth Africa's Health Minister Unhappy With International Reaction to Omicron Strain
16:32 GMTKremlin: Anti-Russian Campaign Could Be Used to Distract From Kiev’s Possible Military Op in Donbass
16:11 GMTGermany Warns US Congress Nord Stream 2 Sanctions Will 'Damage Transatlantic Unity', Docs Show
15:54 GMTPrince Harry Lashed Out at Prince William Who Asked Him Not to Rush Things With Meghan, Book Claims
15:45 GMTPoland Ready to Help Finance Return of Migrants Stuck at Border With Belarus to Home Countries
15:05 GMTTwo Iranian Seamen 'in Good Health' After Being Rescued by US Navy Ship in Gulf
14:51 GMTThe Omicron Strain: What is Known About New COVID-19 'Variant of Concern'
14:47 GMTAustrian Chancellor Speaks for Proceeding With Nord Stream 2 Pipeline Project
14:43 GMTKyrgyz Lawmaker Detained on Suspicion of Plotting a Coup - Source
14:19 GMTBiden's Attempt at Sending Message of Return to Normalcy Thwarted by New COVID Variant
14:00 GMTMacron Bashed for 'Throwing Toys Out of Pram' as Patel Uninvited to EU Talks on Channel Crossings