Why Russia's Sketchy 90s-Style Privatization Will Never Be Repeated 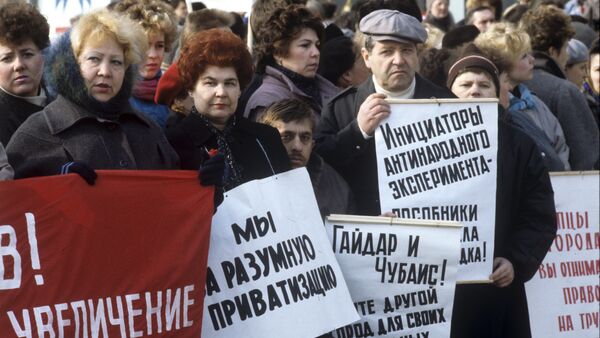 In the early- to mid-1990s, immediately after the collapse of the Soviet Union, the Russian government began a vast campaign to privatize state-owned assets. The fire sale included major industrial, energy and financial enterprises, and resulted in massive economic turmoil, a dramatic growth in poverty and inequality, and the political rise of Russia's oligarchs.

In the 2000s, after succeeding Boris Yeltsin, Vladimir Putin managed to partially reverse the results of the privatization, regaining several strategic assets, including in the defense and energy sectors, and to reign in the oligarchs, virtually eliminating their open attempts to influence Russian politics.

Russia
Brilliant Future: Russia Targets China, Japan as Its Major Diamond Sales Markets
Today, the combination of the country's difficult geopolitical situation, together with structural difficulties in the Russian economy stemming from dependence on energy prices, and the recession, has created problems for the government in its efforts to fill state coffers. One of the Medvedev government's proposals has been to launch a new, large-scale process of privatization.

A list of state companies whose shares may go up for sale was drafted years ago, long before the present economic slowdown and even before the 2014 crisis in relations with the West over Ukraine. However, commenting on the proposal, independent economic journalist Dmitri Pskezin pointed out that "as time goes by, this list hasn't gotten any shorter." The key question, according to the analyst, is "Why?"

In an analysis published by the independent news and analysis portal PolitRussia, Pskezin noted that "at first glance, the state's actions seem absolutely illogical" from a financial standpoint. "Instead of selling choice pieces of state property to private investors, and thus receiving much-needed funds to help plug holes in the budget, the government has persistently chosen to bear the almost unbearable burden of supporting state companies instead."

The privatization initiative's lack of momentum has been underscored by government statistics. In late July, the Accounts Chamber prepared its report auditing the execution of the budget for the first half of 2016. The report confirmed that "Transactions involving the shares of the major companies listed in Chapter 1 of the Privatization Program for the Years 2014-2016, implemented on the basis of the decision of the Russian government, have not been made, as of July 1, 2016."

Putin: Vital to Revive Economic Ties With Ukraine
Meanwhile, Pskezin added, Russia's budget deficit between January and July 2016 has been growing, and now stands at 1.5 trillion rubles (about $23.2 billion), which is an increase of 35.4% compared to this time last year, according to a Federal Treasury report. At the same time, "the figure on 'funds from the sale of shares and other equity of federal ownership' fell far short of reaching expected targets. Revenues from privatization in the first half of the year amounted to only 6.2 billion rubles [about $95.5 million], or 18.6% of the planned figure."

At the same time, government grants and subsidies to state corporations have also fallen considerably. "For example, the state company Russian Roads has been given a paltry 120.5 billion rubles, Russian Railways 47.4 billion rubles, Rosatom 36.5 billion, and Vnesheconombank 164.5 billion."

In this situation, the economic analyst noted, state policy looks something akin to carrying a suitcase without a handle: "Carrying it (i.e. supporting state companies) is hard, but the state is also hesitant to drop it (i.e. to privatize)."

That hesitation has already led to postponing the sale of a 25% stake in Sovcomflot, Russia's state-owned marine shipping company, until 2017. The bank VTB and oil company Bashneft have similarly seen their privatization deadlines shifted. Commenting specifically on VTB last month, Deputy-Prime Minister Igor Shuvalov explained that while "we thought at first that a deal could be made in 2016, after consultations, we decided that now is not the best time. VTB's shares will not be offered this year." 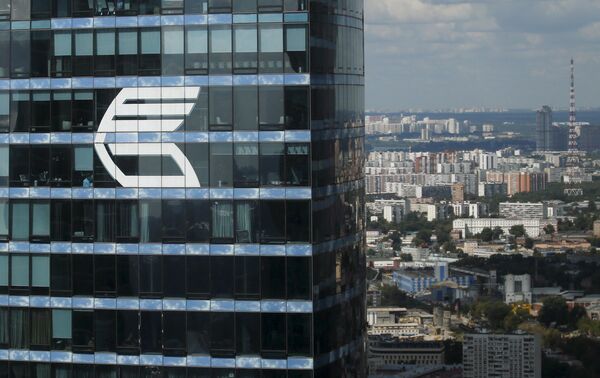 The logo of VTB Group is seen through a window of Imperia Tower on the facade of the Federatsiya (Federation) Tower at the Moscow International Business Center also known as "Moskva-City", in Moscow, Russia, in this August 5, 2015 file photo
© REUTERS / Maxim Zmeyev

As for Bashneft, Pskezin recalled that the sale of its shares "had practically been prepared, and set to bring 306 billion rubles into state coffers. However, Shuvalov then explained that the deal will only take place after the privatization of [state oil company] Rosneft. And that, according to Economic Development Minister Alexei Ulyukaev, may not take place this year either; this despite the fact that it was said quite confidently late last year that the sale of 19.5% of its shares, estimated at 580 billion rubles, would soon occur."

In fact, the economic journalist noted, going back as far as 2012, then-Economic Development Minister Alexei Belousov had predicted the sale of major portions of state companies by 2016, including VTB, Rosselkhozbank and Rosagroleasing (agricultural banking and agro-leasing companies), Sovcomflot, Sheremetyevo Airport, Aeroflot (the Russian state airline), United Grain Company, ALROSA (diamond mining), RusHydro, Zarubezhneft (a state oil company) and energy firm Inter RAO UES. Alas, for the most part, since then, things have not taken place as planned, particularly after the worsening in relations with the West over Ukraine in 2014. 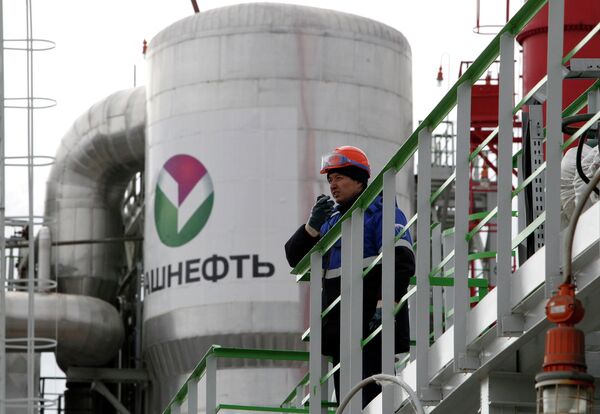 Why Russia Keeps Investing in US Economy Despite Political Tensions
At a year-end press conference in late 2015, Vladimir Putin, seeking to avoid depleting the country's hard-won financial reserves, admitted the possibility of some state companies' shares, including those of Rosneft and Aeroflot, being sold off, on the condition that the controlling stakes be left in state hands.

Shortly thereafter, in February 2016, Putin invited the company heads of VTB, Rosneft, Bashneft, Russian Railways, Sovcomflot, Aeroflot and ALROSA to discuss the principles according to which state property may be privatized.

The meeting quickly led to a debate between Russia's liberal and conservative economists on whether the conditions for privatization were "ripe" or not, and on the effectiveness or ineffectiveness of state ownership. Those criticizing the most ardent proponents of privatization, including well-known political scientist Yuri Krupnov, warned that Russians still have a bad taste in their mouths from the crooked privatization schemes of the 1990s.

For his part, presidential advisor Sergei Glazyev offered his own warning, unambiguously voicing his opposition to privatization. "The key question," he noted, "is who the buyer will be, who the beneficiary of this privatization will be. Will it be the oligarchs? Or perhaps the financial speculators, who won a huge jackpot on the Moscow stock exchange by collapsing the ruble [in 2014], depreciating the incomes of enterprises and the country's citizens?"

What Sanctions? Foreign Investors Keep Placing Money Into Russian Companies
The Russian president, Pskezin noted, took all the conflicting viewpoints on privatization into account, and "soon formulated the principles on the sale of state property."

These, according to the economic analyst, can be summed up in the following six points (in Putin's own words):

First, "all privatization transactions must strictly conform to the norms and requirements of the law. Needless to say, it is also necessary to ensure maximum transparency in these transactions, for participants and for the public."

Second, "privatization must not lead to the state losing control of strategically important companies…The controlling stakes in state-owned enterprises of fundamental importance to their sectors should remain in state hands, for now at any rate."

Third, "the selling off of state assets must be justified and expedient from an economic point of view. The current circumstances and market trends must be taken into account."

Fourth, "shares [in state companies] cannot be sold off for a pittance at bargain prices."

And finally sixth, "future investors and buyers must find their own resources or borrow funds, but not from state banks."

The president's demands are short and clear, Pskezin noted. "And it's possible," the economic analyst added, "that it is the impossibility of interpreting these principles in any 'ambiguous' manner that privatization has stalled today. That's probably for the best; because against the background of collapsed stock markets, there is no shortage of speculators chasing cheap morsels of state property, particularly among those who profited from currency speculation [in late 2014]. It's unlikely that these people would be genuinely interested in actually developing their privatized [assets]."

Accordingly, Pskezin suggested, "the experience of the 90s has convincingly demonstrated that a private owner is not always a better owner than the state. If that's the case, it's better to hold on to this property until better times."