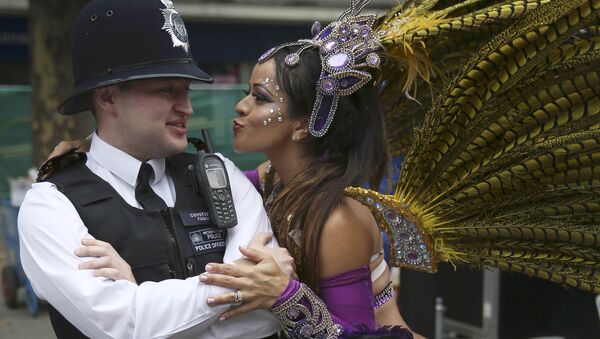 Residents of the wealthy west London suburb have renewed calls for Notting Hill Carnival to be relocated where crowds can be more easily controlled following a record number of arrests and stabbings.

A teenage boy has been left fighting for his life in hospital after being slashed in the stomach with a so-called "zombie killer knife" at Notting Hill Carnival in London. The attack was one of four stabbings and 88 knife related crimes at the parade which was celebrating its 50th year.

London's Metropolitan Police Service (MPS) said more than 440 people had been arrested, which included 17 attacks on police officers and 169 for possession of drugs; a record number for the annual street party.

Night is starting to draw in, know your journey home? Why not plan it now? #NottingHill 🤓🚇😴👍 https://t.co/8OCz4F4CnW pic.twitter.com/qege6D0Cij

A Section 60 order, allowing officers to randomly search anyone covered the entire Carnival area with facial recognition cameras in use. After nightfall, officers dressed in riot gear were deployed onto the streets.

another year of #nottinghillcarnival another slew of #arrests & incidents #crime #criminals https://t.co/J2QyYMGNXY

Other arrests included 13 for sexual offenses; 10 for theft, eight for going equipped for theft; six for grievous bodily harm; three for drink or drug driving; 17 for common assault; two for criminal damage one for robbery; and 32 unspecified arrests.

Commander Dave Musker, who was in charge of the policing operation said:

"I am very proud of all the officers and staff who were deployed to Carnival this year. Once again they demonstrated their unwavering professionalism and bravery to ensure this spectacular celebration, that headlines the London event calendar, was not spoilt by a small minority wishing to use the Carnival a cover for committing crime."

"There were 15 reported violent injuries involving a knife or blade. Of these, two people suffered very serious injuries. Both victims are now stable conditions and in both cases arrests have been made and enquiries by officers continue."

There were 45 incidents of assaults against police officers, "for varying degrees of minor injuries and eight officers' required anti-viral treatment at hospital as a result of being spat at. Of these 45 incidents, 25 assaults resulted in arrest," Commander Dave Musker said.

The violence and crime witnessed at this year's Notting Hill Carnival is not an isolated example of the increasing incidents of gang related violence in London, which is home to around 225 gangs that control the streets of the capital.

Figures suggest gang-related crime is on the rise again, up 23 percent from last year with more than 6,000 incidents of serious youth violence this year.

Fifteen teenagers were fatally stabbed in London in 2015, the highest level in seven years after 23 teenagers died from stab wounds in 2008. Those who died in 2015 were male and mainly from black and minority ethnic (BME) backgrounds.

A 19-year-old was recently hacked to death in Selsdon, near Croydon, marking the fourth of eight fatal stabbings across the capital this year alone, all victims of knife crime, four of which took place in August alone.

At the beginning of the summer, an impromptu water fight broke out on one of the hottest days of the year in London, ending with another attempted stabbing after violence erupted when police attempted to break up the crowd.

Earlier in August, a teenager who murdered a man in a park for giving him "the wrong look" was jailed for 22 years. The 18-year-old disemboweled another man with a kitchen knife by stabbing him in the stomach in East London.

The UK is set to screen a new documentary, "Gangland: Turf Wars," offering unprecedented footage of the inner-workings of gangs, filmed by members of the gangs themselves after film-maker Paul Blake gave gangsters cameras to record themselves. Film shots include caches of weapons, guns knives and the selling of class A drugs.

An unflinching look at the world of British gangs. Their lives through their eyes. #Gangland: Turf Wars. 1 September pic.twitter.com/SFQcpOqJci

Blake told British media he wanted to shoot the film to stop people dismissing it as a "black problem."

"We are telling this story because it means they are not faceless, they're not just some line in the newspaper that we all move on from instantly or don't even bother to read about in the first place.

"This is warfare on our own doorstep and young kids are dying," said Blake.

The debate over the future of Notting Hill Carnival will rumble on in the UK for another year with renewed calls for it to be moved — or closed down as the whole of London witnesses an increase in knife related crime.