What’s Behind Nostalgia for the USSR? Public Opinion Might Surprise You! 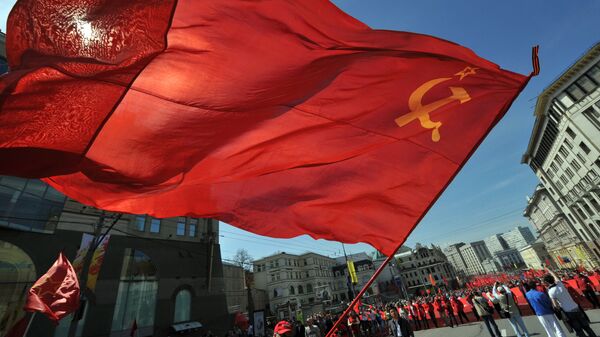 © Sputnik / Sergey Kuznecov
/
Go to the mediabank
Subscribe
International
India
Africa
A recent Sputnik News poll revealed that, in nine of the eleven former Soviet republics, a majority of those over the age of 35 think life in the USSR was better before its disintegration.

Michael Parenti, author of Blackshirts and Reds: Rational Fascism and the Overthrow of Communism, and Loud & Clear producer Walter Smolarek, sat down with Radio Sputnik's Brian Becker to talk the significance of the dissolution of the USSR.

According to the Sputnik survey, 64 percent of Russian residents who lived in the USSR rated life in the Soviet Union higher than it after its dissolution. The highest percentages of such respondents are registered in Armenia and Azerbaijan. The same opinion is registered among 61 percent in Kazakhstan, 60 percent in Ukraine and Kyrgyzstan, 53 percent in Belarus, and 51 percent in Georgia. In Tajikistan and Uzbekistan, those polled believe life improved after the end of the USSR. People 25 and younger — those who were born after or shortly before the break-up — think life today is better.

Results among former Soviet residents certainly stand in contrast to the Western perception of the disintegration of the USSR as "a revolution of democracy."

In 2004, leading Russian historian Richard Pipes published the results of a survey in the New York Times, suggesting that 74 percent of Russians regretted the demise of the Soviet Union, after the newly-formed government cut back job guaranties, health care, and other social services. A new market system eliminated price controls, as well as subsidies for food and housing, clothing, transportation and utilities. The new "unjust economic system," or "free market new capitalism that was coming in," turned out to be a more problematic system than the previous form of communist collectivism, according to Parenti.

Painful economic "shock therapy" imposed on the USSR by the International Monetary Fund led to the formation of a new elite that quickly acquired most of the once-collective property. The standard of living in Russia dropped drastically.

"You don't get rich without creating poverty," it was jokingly said at the time. But while oligarchs got rich, the poor got poorer.

Of course, Russia is not in the same state today it was in the 1990s. President Vladimir Putin has a 91 percent approval rating, indicating that he is doing something right.

"Any leader who uses the land, the labor, the resources, the market of this country in any way that's helping and moving along in the developmental way is usually demonized" abroad, according to Parenti, suggesting that the popular Russian leader is found by the West to be "dangerous and a danger to imperial capitalism."

Some pro-Western liberals claim that nostalgia for the Soviet Union is a desire to return to communism or the GULAG. Others recognize the reason to be more complex, citing peace and friendship between nations as an achievement of Soviet society. Those raised on Soviet values claim that they often miss the popular respect paid to science and education.

Most acknowledge, however, that a revival of the Soviet Union is not practical. What people can take from Soviet history, however, is experience, memory, social technologies and eternal values, aspects of a society that can lead to peace for the entire world.