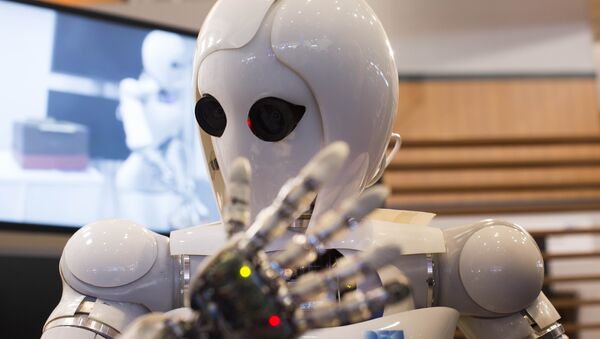 © AFP 2021 / CARSTEN KOALL
Subscribe
Researchers from Princeton University found that artificial intelligence systems may show signs of racism. During the study, the robot found the names of white Americans “pleasant”, while considering the names of black Americans “unpleasant,” according to the study.

The study involved a self-learning artificial intelligence system, GloVe. It has the ability to read and interpret online text.

“We replicate these using a widely used, purely statistical machine-learning model—namely, the GloVe word embedding—trained on a corpus of text from the Web,”  reads the study.

Robot Cop Arrives to Help Police Investigate Crime, But It's Not What You Think
In the associated task, the system is prompted to link certain words like “flowers” and “insects” with other words that the scientists define as “pleasant” or “unpleasant.” For example, the robot had to pair the word “family” with “accident”; it did so successfully.

But when researchers offered GloVe a list of white and black-sounding names, the robot went absolutely racist!

The intelligent system identified names that are common among white people as “pleasant”, while African-American names were categorized as “unpleasant” words.

“Our results indicate that language itself contains recoverable and accurate imprints of our historic biases,” the researchers told RNS.

According to Freakonomics author and Economist Steven Levitt, the kind of parent who is most likely to give a child a distinctively black name is "an unmarried, low-income, undereducated, teenage mother from a black neighborhood who has a distinctively black name herself," according to an empirical study of birth-certificate information for every child born in California since 1961. He also notes that prior to the Black Power movement of the 1960's and 1970's, white and black baby names were similar.