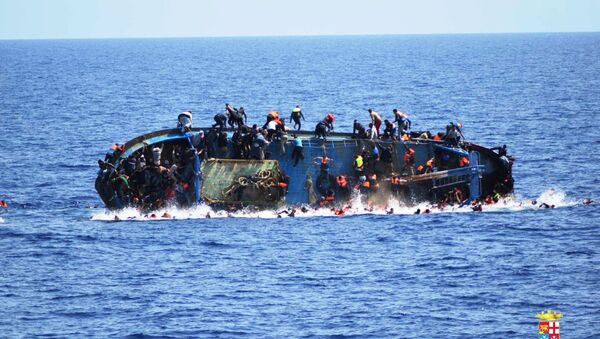 European Union border management agency Frontex has agreed with several European countries to carry out a "stress test" of border control in the EU, German newspaper Welt am Sonntag reported.

Erdogan Set to Flood Europe With Millions of Migrants as EU Refugee Deal Falters
The EU's border control agency Frontex is planning a stress test of the continent's borders, in order to test their ability in dealing with an upsurge in the number of migrant arrivals, German newspaper Welt am Sonntag reported on Sunday.

"We have to prepare better for a crisis," Frontex director Fabrice Leggeri told Welt am Sonntag.

Leggeri said that the scenarios for the stress test have yet to be determined, but they are expected to include the protection of borders at sea, on land and in the air. Several European governments, including those of Germany, Greece, Finland, Slovenia and Romania, have reportedly already agreed to take part in the test.

"We want to see how well member states are prepared to deal with a crisis situation on Europe's borders," Leggeri explained.

The increase brought the total number of migrants detected in the Central Mediterranean in the first seven months of 2016 to nearly 95,000.

That figure is in line with the number of people who arrived in the region in the first seven months of 2015. In total, more than one million refugees and migrants reached Europe across the Mediterranean and Aegean in 2015, mainly arriving in Greece and Italy.

This year, the number of migrants arriving in the Eastern Mediterranean, especially the Greek eastern islands in the Aegean, has decreased dramatically thanks to the agreement the EU signed with Turkey earlier this year, and Macedonia's application of stricter border controls.

Since the EU-Turkey deal went into effect in March, only 8,500 migrants have been detected in the Eastern Mediterranean region, compared to nearly 151,000 in the first three months of 2016.

North African Solution: Merkel Pushes for Turkey-Style Migration Deals
During July in the Central Mediterranean region, Nigerians and Eritreans accounted for the largest share of the migrants, followed by arrivals from Gambia, Ivory Coast and Sudan. A quarter of arrivals in the Eastern Mediterranean during July were from Syria, followed by arrivals from Pakistan, Afghanistan, Algeria and Iraq.

The journey across the Mediterranean appears to have become more treacherous. In 2015, 3,735 people who had tried to reach Europe went missing, and are believed to have drowned. According to the International Organization for Migration (IOM), up to August 24 this year, 3,165 people were reported to have died or gone missing in the attempt to reach Europe.

"The rising number of deaths is probably due to the fact that people smugglers want to increase their profits and are sending migrants on boats that are not seaworthy," Frank Laczko, director of IOM's Global Migration Data Analysis Center in Berlin, told Welt am Sonntag.