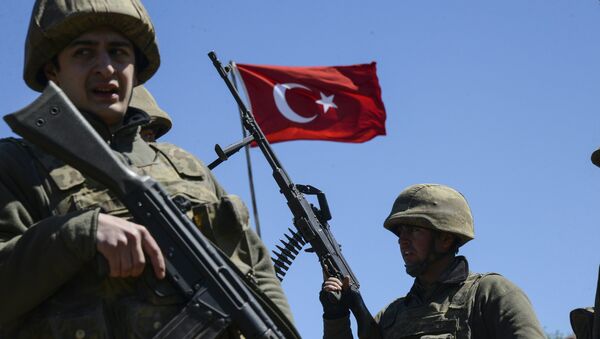 The Turkish-led "Euphrates Shield" operation is likely to swing the balance in favor of Washington, some analysts say, while others warn that the US may alienate its Kurdish allies in Syria. They agree, however, that Ankara's involvement will dramatically change the course of the war.

Turkey's involvement in Syria may dramatically change the course of the war, analysts and media pundits claim.

"The Turkish military launched a cross-border operation on Wednesday named "Euphrates Shield" along with the US-led coalition in Syria's northern border city of Jarablus to clear the area from the Daesh [ISIS/ISIL] terror organization," Turkish media outlet Daily Sabah reported Wednesday, adding that "the move comes after a series of mortar bombs landed in the town of Karkamıs facing Jarablus along the Syrian border beginning Tuesday morning."

This is How Erdogan's Military Operation in Jarablus Complicates Syrian Puzzle
However, according to the Guardian, Ankara's recent move as well as previous diplomatic maneuvers shows that Turkey's priority is "to curtail the territorial ambitions of Kurdish combatants."

The irony of the situation is that some of these Kurdish militants "happen to be US proxies" in the war against Daesh.

"Turkey is in effect deploying forces in Syria with US support, with the aim of pushing back Kurdish groups that the US also supports," the media outlet notes.

Although the Syrian Kurdish People's Defense Units (YGP) have earned the reputation of capable fighters against Daesh, Washington has clearly signaled that it puts Turkey's interests before those of the Kurds.

Remarkably, the Obama administration dispatched Vice President Biden to mend ties with Ankara amid a certain chill in relations between the two countries, which followed the attempted coup in Turkey.

Thus, unsurprisingly, "Biden warned the Syrian Kurds in no uncertain terms that the US would not tolerate any effort to turn Kurdish advances against the Islamic State, also known as ISIS [Daesh], into an autonomous Kurdish entity along the Syrian-Turkish border," Howard LaFranchi of The Christian Science Monitor stresses.

Hillary Clinton-Backed 'No-Fly Zones' Taking Shape in Syria
Commenting on the Turkish-led advance in northern Syria, Tim Arango of the New York Times emphasizes that the "Euphrates Shield" operation "has highlighted how Mr. Erdogan, even after the purge, secured more operational control of the military."

"It allowed him to undertake Turkey's most ambitious role yet in the long Syrian civil war," the journalist remarks.

For his part, Faysal Itani, resident senior fellow at the Rafik Hariri Center for the Middle East at the Atlantic Council, suggests in his article for the Foreign Policy Magazine, that Turkey may become Washington's long-anticipated "professional military ally" against Daesh in Syria.

Itani believes that Turkey's involvement in the conflict "will shape the war on the extremist group to Washington's advantage."

On the other hand, "the campaign itself may launch a new era of US-Turkish cooperation in Syria," he insists.

However, Deutsche Welle has expressed concerns Friday, regarding Ankara's crackdown against the Kurdish militants.

"Turkey's openly hostile stance against the YPG has been a thorny issue with the US-led anti-IS coalition which has relied on YPG fighters on the ground to coordinate its strikes against the jihadists in Syria," the media outlet underscores.

Turkey's Operation 'Not Limited to Jarablus' in Attempt to Secure Border Areas
The media outlet cited Gareth Jenkins, an Istanbul-based scholar with the Silk Road Studies Program at Johns Hopkins University, who warned that "Turkey and the US have very serious differences about what is happening in Syria."

Moreover, Julian Ropcke of Germany's Bild newspaper dubbed the Obama-Erdogan agreement as "extremely dangerous" and added that Turkey's "intervention" in northern Syria has marked a "radical turnaround" in the war.

The journalist notes that by siding with Ankara Washington risks upsetting its alliance with the Kurdish-dominated Syrian Democratic Forces (SDF) — the US' only tool in the fight against Daesh in the region. 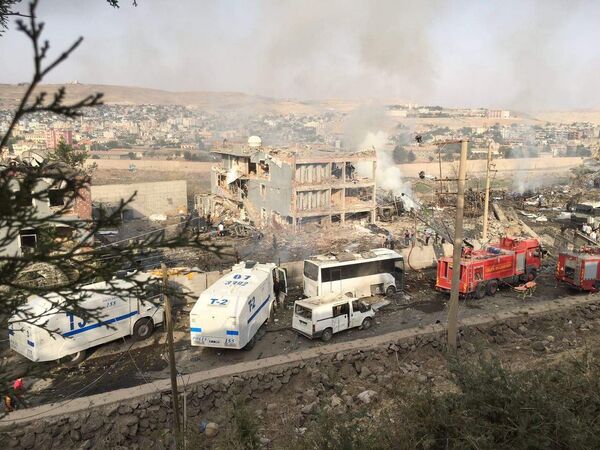 "Turkish officials have not given a timetable, but have indicated that the army would stay as long as it takes to neutralize security threats to Turkey — defined as the Islamic State, also known as ISIS or ISIL [Daesh], and Syrian Kurdish militias," Arango points out in his article.

The question has acquired a new meaning after a truck bombing in the Turkish town of Cizre killed at least 11 police officers on Friday. The attack was allegedly carried out by Kurdish insurgents.