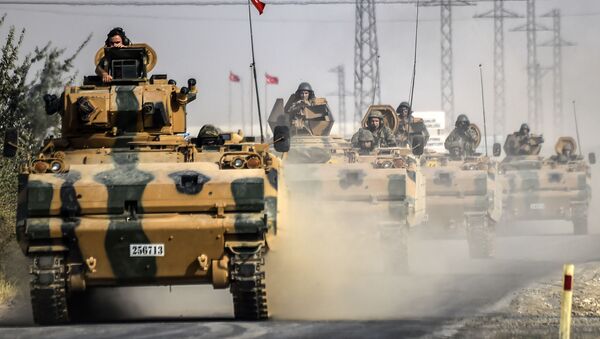 © AFP 2023 / Bulent Kilic
Subscribe
International
India
Africa
Turkish leadership contemplated launching a military incursion in northern Syria two years ago, but it was repeatedly postponed due a deep freeze in relations with Russia in the wake of the Su-24 incident, opposition from high-ranking military officials and Washington's concerns, Hurriyet reported, citing an unnamed senior military source.

"The Turkish government has been working on a ground incursion for more than two years," the source said, adding that Ankara "came close to putting boots on the ground" in Syria at that time.

Kurds Say Something's Fishy About Turkey's Swift Victory in Jarablus
Like the ongoing Operation Euphrates Shield, that offensive was meant to free Jarablus. The Syrian town located close to the border with Turkey was captured by Daesh in 2013.

On Wednesday, the Turkish-backed Free Syrian Army liberated Jarablus in a major ground offensive in northern Syria that saw Turkish warplanes, tanks and special forces cross the border and engage in fighting.

Two years ago contingency plans were prepared for the possible offensive, but "certain commanders within the military" prevented the leadership from moving forward with the initiative, the source explained. These individuals "came up with excuses," saying that the Turkish Armed Forces lacked military capabilities for a ground operation in Syria.

The newspaper named Brig. Gen. Semih Terzi of the special forces as one of those, who were against Ankara's plans in Syria. Terzi was fatally shot during the failed military coup that rocked Turkey on July 15. 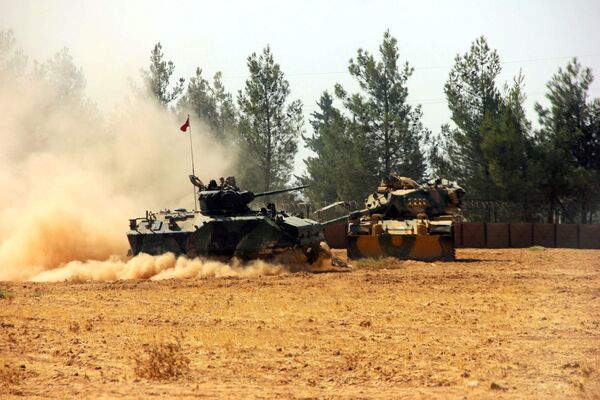 A Turkish army tank and an armoured vehicle are stationed near the Turkish-Syrian border in Karkamis in the southeastern Gaziantep province, Turkey, August 23, 2016.
© REUTERS / Ihlas News Agency

Operation Euphrates Shield was launched on Wednesday and is led by Lt. Gen. Zekai Aksakalli, the commander of Turkey's special forces. Terzi was Aksakalli's deputy. The latter played a major part in making sure that coup plotters did not succeed in overthrowing the government as the events unfolded.

Three Reasons Why Russia, Iran and Turkey Should Foster Political, Military Ties
Turkey apparently raised the issue of a possible ground offensive in northern Syria with coalition allies, including the United States in June 2015, but Washington "did not believe Turkey's plan [was] feasible." US leadership was concerned that there were not enough rebels to free Jarablus and surrounding areas.

The Su-24 incident was also a factor that prevented Ankara from giving the operation the green light.

"After the downing of a Russian jet in November 2015, it became practically impossible to implement our plans due to the lack of air cover. It wasn't until the recent rapprochement with Russia, in this sense, that the ground incursion could practically go forward," the source explained.