'Combination of Errors' May Have Resulted in 2013 Syrian Chemical Attack 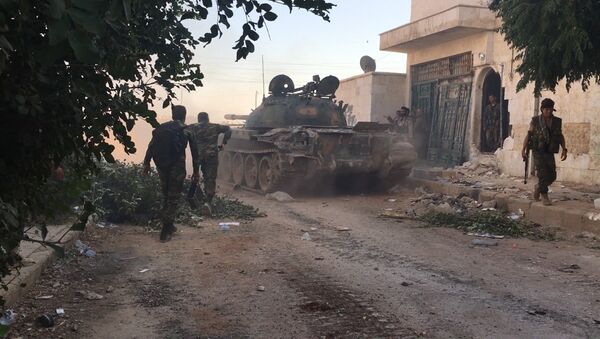 Syria has accused French intelligence services of being behind the 2013 chemical attack in Damascus. The corresponding statement was made by Syrian ambassador to the UN Bashar al-Jaafari earlier this week. Sputnik spoke to former British Army senior counter-terrorism specialist Major Chris Hunter.

“Looking at the facts that I have seen, one of the theories is potentially that a regime’s artillery bombardment hit a rebel store where there were chemical weapons and it contained what you call the ‘kitchen-made sarin’ rather than the government type stocks.”

UN Must Take Steps Over Report About Chemical Weapons' Use in Syria – French FM
He further said, “I think potentially what we may see here is a combination of errors that resulted in this catastrophe.”

The specialist further spoke about the chemical weapons in Syria and whether or not they were disposed of.

“Effectively at that point, war was avoided against the Syrian regime and of course they said they would give up their weapons. I think one of the issues was the fact of knowing whether all of those weapons had actually been given up or whether some of them were actually being kept back and hidden,” the specialist said.

Hunter noted that if Assad had given up all of those weapons it can still be possible for anyone to get hold of commercially available, industrial chemicals that could be used in the chemical attacks.

According to the specialist there have been so many conspiracy theories about this tragedy.

“Although some suggestions like the French intelligence services carried out these attacks in order to prevent UN inspectors going to Aleppo to investigate are probably just conspiracy theories, although there is never smoke without fire either,” Hunter said.

US Adopts Double Standard Approach Toward Use of Chemical Weapons
He further said that, “The truth always comes out. If you look at history, the French are always accused and convicted of the rainbow warrior thinking, so we know that certainly intelligence services have carried out attacks in the past but if you look to Russia, the accusations against the president such as him being implicit in the Moscow apartment building bombing to justify the offensive in Chechnya are all just accusations.”

Hunter said that to actually carry out any such force flag operation requires complex planning and so many moving parts.

According to al-Jaafari, the incident was orchestrated to prevent UN inspectors from going to Aleppo to investigate another assault blamed on rebels.

Responding to the allegations, France’s representative to the UN Security Council dismissed the claims as “absurd”.

The sarin gas attack occurred in the Damascus suburb of Ghouta on August 21, 2013, killing more than 1,003 civilians.

Shortly after the attack, many western politicians blamed Damascus for it and called to take action against the government of Syrian president Bashar Assad.

Back then, Britain was close to intervening in the Syrian conflict, but the House of Commons narrowly voted against the move.