‘We Want to Live in Peace’: Serbian President Offers Olive Branch to Croatia 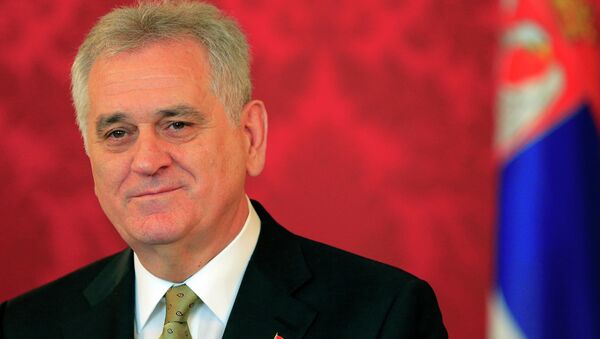 In an interview with Sputnik Serbian President Tomislav Nikolic commented on the statements by Croatia’s ex-Prime Minister Zoran Milanovic who, during a meeting with Croatian veterans of the 1992-1995 war, called Serbs “small fry.”

In the run-up to the September 11 parliamentary elections in Croatia, local political parties have been ramping up their anti-Serb rhetoric to an extent that Serbian Premier Aleksandar Vucic refused to stay away from a political forum now going on in Dubrovnik.

President Nikolic told Sputnik that he was saddened by what was going on in the neighboring country.

“If you are building your domestic policy on hatred towards another country then it means that Croatia keeps sliding towards the brink of precipice ignoring warnings coming from Serbia, the EU, from across the Atlantic, by all those who want a happy future for our planet,” the President said.

“Milanovic is a peculiar type of a politician; he expects to form a new Cabinet after the elections and has already given us to understand how ruinous his government’s actions are going to be for our bilateral relations.”

Tomislav Nikolic also said that Milanovic’s words reminded him of what Ante Pavelic [the leader of the Nazi puppet government of the “Independent Sate of Croatia” during WWII] thought about Serbs and how he treated them.

“I’m afraid that many in Croatia remain stuck in the past. We are not going to close our border and break off ties with Croatia. We will keep trying to mend fences. It is up to the Croatians to decide whether were have normal relations or not,” he said.

He added that Serbia’s silence was not a sign of weakness.

“It means that we want to live in peace with everyone, including Croatia. Our thoughts are with our fellow Serbs living there who could become refugees because of such statements. In this case Serbia will not sit on its hands and watch all this happen,” President Nikolic warned.

The statement came amid heightened tensions between Serbia and Croatia. Earlier this month, Balkan media outlets reported that the Croatian Foreign Ministry had sent a note of protest to Serbia after critical statements from Belgrade regarding the rehabilitation of Catholic Cardinal Alojzije Stepinac, who had been supported by the Croatian pro-Nazi Ustashas regime during WWII while in the post of the Archbishop of Zagreb.

Belgrade has also protested over the unveiling of a monument dedicated to Miro Baresic, a Croatian national who had been convicted for the murder of the Yugoslav Ambassador to Sweden Vladimir Rolovic in 1971.