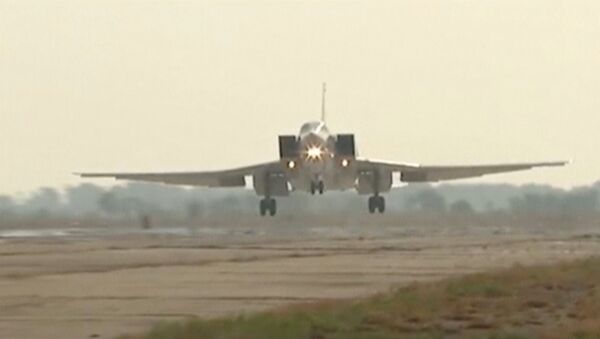 © REUTERS / Ministry of Defence of the Russian Federation
Subscribe

There is no disagreement between Moscow and Tehran over the use of the Iran’s Hamadan air base by the Russian Aerospace Forces, according to the president of the Academy of Geopolitical Problems, Colonel-General Leonid Ivashov.

"This [cooperation in Hamadan] is profitable first and foremost to the Iranian side and the military. Now during the time that we have the right to be present there, will the Americans or the Israelis prepare an attack on Iran, like it was a few years ago?"

“It increases the level of military security for the Islamic Republic of Iran,” Ivashov said during a press conference at Rossiya Segodnya International Information Agency.

World
Russia Stops Using Iran's Hamadan Airbase - Iranian Foreign Ministry
At the same time, he stressed that there is “no disagreement among the military there.” “Look for the differences [between Russia and Iran] in the medium of dependent journalists,” the expert said.

He said that he expects that “Russia’s Sukhoi planes will be liked by the Iranian military.” After assessment of cooperation on the Hamadan air base “the sailors [Russia and Iran] will also likely think about how to carry out joint military exercises.”

On August 16, Russia used Iran’s Hamadan base amid anti-terror operations in Syria to carry out airstrikes against Daesh and al-Nusra Front. On August 18, the Russian planes left Iran.

On Monday, Russian Defense Ministry spokesman Maj. Gen. Igor Konashenkov said that further use of the Hamadan airfield for Russia’s anti-terrorist mission in Syria would be carried out in line with bilateral agreements with the Islamic republic and events on the ground.

Meanwhile,  chairman of the Iranian parliamentary committee on foreign policy and national security  Alaeddin Boroujerdi said that Russian military aircraft in Iran are only allowed to refuel at the Hamadan airbase in accordance with existing agreements.