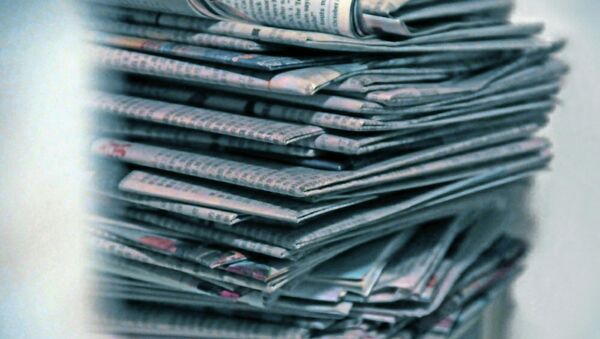 According to the newspaper, German newspapers and television not only promote a negative image of Russia, but also put pressure on businesses and politicians in Germany.

The website also noted that German media have become a "transatlantic propaganda machine," which follows the mood of Washington and ignores the interests of Berlin.

"If one takes a look at the articles and publications over the past three years, one will see that the German media do not act as the mouthpiece of Berlin, but rather as a means of external pressure on the federal government, politicians and the public in Germany," the article said.

Western Media Use Made-Up Facts to Promote Anti-Russia Propaganda
This trend can be explained by a number of reasons, the newspaper wrote. First, the media have to adjust to their clients, investors and sponsors, rather than the readers. Another factor is the relationships between journalists and the so called "centers of power". On the one hand, these relations are necessary to obtain insider information, but on the other, they imply a certain level of intimacy.

Earlier German journalists maintained a close relationship with local authorities and companies, but over time, media employees have increasingly started to join various trans-Atlantic organizations. These links provide opportunities for career growth, but at the same time impose certain obligations, the article said.

Moreover, as the newspaper noted, the increasing dependence of small media sources on large international news agencies contribute to the situation in which media reports become more biased. Many newspapers and TV stations struggle to find money to pay for the work of correspondents, journalists, photographers and observers in various parts of the world. Therefore, journalists often base their work on the materials of large news agencies such as Reuters, dpa, AP and others, the newspaper concluded.