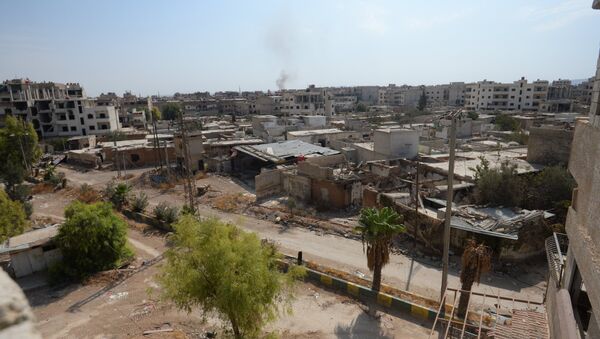 The Syrian authorities have begun evacuating civilians and militants from Darayya, a southern suburb of Damascus, a Sputnik correspondent reported Friday.

Russia Invites Japan to Join Aleppo Humanitarian Operation in Syria
DAMASCUS (Sputnik) – On Thursday, reports emerged claiming that the Syrian army and the so-called moderate armed opposition reached an agreement under which some 4,000 civilians must leave Darayya, as well as 700 armed terrorists, who will be taken to Idlib.

As many as 25 buses will be taking militants to Idlib, while 30 buses will take militants’ facilities. There are also 15 ambulances to evacuate the wounded.

Russia Invites Japan to Join Aleppo Humanitarian Operation in Syria
On February 27, a US-Russia brokered ceasefire came into force in Syria. Terrorist groups such as Daesh and Jabhat Fatah al Sham (previously known as al-Nusra Front), are not part of the deal.
Fighters of several militant groups have been surrounded by Syrian government forces in Darayya for several months. At the same time the province of Idlib has been fully controlled by Jabhat Fatah al Sham, which is outlawed in many countries, including Russia, and its allies.
Newsfeed
0
Access to the chat has been blocked for violating the rules . You will be able to participate again through:∞. If you do not agree with the blocking, please use the feedback form
The discussion is closed. You can participate in the discussion within 24 hours after the publication of the article.
To participate in the discussion
log in or register
loader
Chats
Заголовок открываемого материала