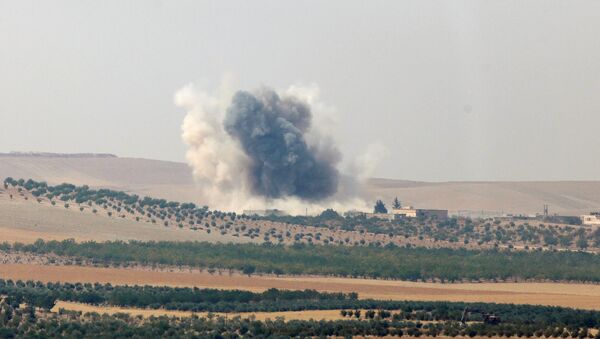 Turkish leadership has stated that its military operation in northern Syria is designed to push Daesh out of Jarablus, but the offensive was launched "right after" Kurdish forces secured major victories in the region, Idris Baluken of the pro-Kurdish Peoples' Democratic Party (HDP) told Sputnik, adding that this points to Ankara's true goals.

"The name of the offensive, Operation Euphrates Shield, indicated that these activities are aimed against the Kurds, the people of Rojava," also known as Western Kurdistan, he said.

The Turkish politician pointed to the timing of the campaign that was launched early on Wednesday. It came after the Syrian Democratic Forces, mostly made up of Kurdish fighters, pushed the militants out of a strategically important city.

"Firstly, they liberated Manbij. Then they cut communications between Jarablus and Raqqa," the de facto capital of Daesh's caliphate, he said. "Right after that Ankara made a decision to launch a military operation in Jarablus. Why was Turkey OK with Daesh's [presence in the region] for years? Ankara's true intentions are obvious."

The politician insisted that the Free Syrian Army that is taking part in Operation Euphrates Shield shares the same ideology as Daesh, adding that the FSA is mostly comprised of al-Nusra Front and Ahrar al-Sham fighters. Russia and many other countries consider these groups to be terrorist organizations.

You Shall Not Pass: Turkey 'Wants to Control 100Km Corridor' on Syrian Border
Idris Baluken further said that Turkey has de facto become a party to the Syrian war. He added that President Recep Tayyip Erdogan and the AKP "deliberately" dragged the country into "the toughest war" in the Middle East.

Turkish leadership did not secure an approval from the parliament before making the decision to launch the operation. "No discussions were held on the issue since the parliament is in recess," he added. "The ruling party used this moment to deploy troops to Syria."

The politician also said that Turkey's operation will undermine Kurdish efforts aimed at achieving autonomy and self-determination in northern Syria.