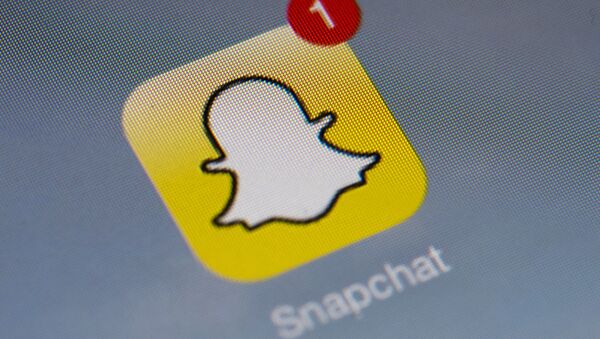 Snapchat is basically an app for a smartphone that can send multimedia messages, like a photograph or a short video, "snaps" that can also include text or effects.

The trick is, is that the image or video can only be viewed for a certain amount of time — between one and ten seconds before it disappears. This transient, instant and short shelf-life approach to social media is proving to be very popular.

Here's a #cheatsheet that might help with all those #Snapchat direct messaging icons. pic.twitter.com/2z768VZMD8

​According to a new report from eMarketer, the company, based in California is set to see a 27.2 percent increase in users during 2016, growing by a further 13.6 percent in 2017, outpacing rivals like Facebook and Twitter.

​"Snapchat is still very much in its growth phase. Having launched in September 2011 it's still the newest out of Twitter, Facebook and Instagram," Jodie Cook of JC Social Media told Sputnik.

"As a business, they've learnt from all their rivals' previous mistakes, taken what's worked well and built a fun and functional communication tool."

The Revolution Will Be Instant

As for what's keeping the social media site fresh, Cook believes it's down to the company constantly changing and rolling out new features.

"It also means it keeps itself in the news and the Facebook feeds of people who may decide it's time to join the revolution."

When u believe this filter was made for you.. Thanks @Snapchat ❤️ pic.twitter.com/GUXfM9W1Y0

​Snapchat is prolifically used by teenagers, according to eMarketer, the apps' user base in the US is 70 percent millennials.

However, it's expected that in the not too distant future, Snapchat will become more popular with older users perhaps more familiar with Twitter and Facebook. This, according to social media will throw up new challenged for the fledgling social media site.

But the millennials aren't expected to become bored of it just yet, due to the company's decision to sponsor new features to make money. "Snapchat have also chosen clever monetization routes, particularly through sponsorship of new features and filters for example," Cook told Sputnik.

"This is potentially why we've yet to see the kind of user fatigue that we've seen on Facebook and Twitter who have used far more direct monetization tactics."

​Unlike its content, it seems Snapchat's appeal will take longer than ten seconds to disappear.