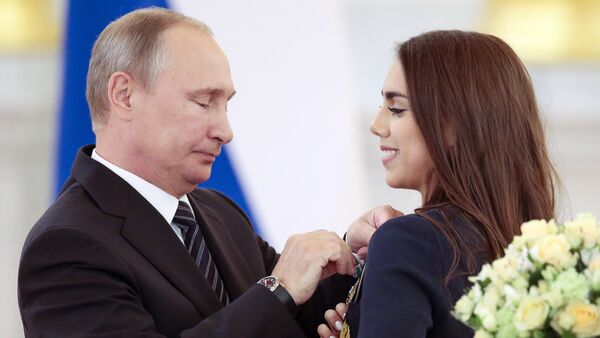 © AP Photo / Ivan Sekretarev
Subscribe
Russian President Vladimir Putin held a meeting with the Russian Olympic team at the Kremlin and awarded athletes for their participation in the 2016 Rio Olympic Games.
Russian athletes ranked fourth with 56 medals, including 19 gold, 18 silver and 19 bronze at the August 5-21 summer games.

"I sincerely congratulate the Russian team with a worthy performance at the XXXI Olympics, and I want to thank you for going through a very severe test with dignity. You have shown great skill, the best endurance and stamina, and confirmed Russia’s strong position in world sport," Putin said.

Sport Minister Praises Russia's Outstanding Performance at Rio Olympics
The Russian Olympic team demonstrated its best after some 1/3 of the athletes had been banned from Rio Olympics, Putin said.

"You, dear friends, coped with all the difficulties, performed as a unified team, proved that victory is given not only by the number – although the number was important in this case – but at least perhaps more importantly, skill. As real fighters, you have not drifted, not broken, but fought and won."

The Russian national Olympic team was allowed to take part in the August 5-21 Games with the notable exception of weightlifters and all but one track and field athletes. Several Russian competitors won their CAS appeals against the International Olympic Committee (IOC) and sports federations' bans.

"We know how difficult it has been for our athletes in Rio. On the eve of the competition, our team has been cut by a third. It was deprived of the opportunity to showcase themselves in sports where Russia is traditionally recognized as a frontrunners," Putin said at a ceremony awarding Russian winners and runners-up in the Kremlin.

He added that Russia cannot accept any doping accusations of Russian atheletes without any proof presented.

"We do not accept and cannot accept any accusations against our athletes if they are not supported by evidence and facts. We will regard this as manipulation," Putin maintained. 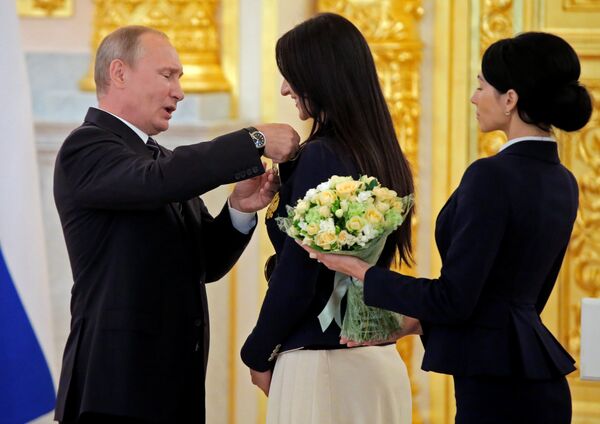 "The decision to disqualify the paralympians is outside the law and outside morality. It is cynical to take it out on those for whom sport has become the meaning of life, who by their example give hope and faith in their own strength to millions of people with disabilities. I feel sorry for those who make such decisions, because they cannot understand that it is humiliating to them themselves."

Russia will organize special competitions for paralympians disqualified from the upcoming Rio summer games, Putin said. "We of course will support you and organize special events where you can showcase your skills. The rewards for winners will be the same as they would be at the end of the Paralympic Games," Putin said.

The Olympic ideals have been blatantly trampled by politics, Putin said.

"Unfortunately, we witnessed how the humanistic foundations of sports and Olympism were blatantly trampled by politics," Putin said, adding that "qualities such as greed and perhaps even cowardice are prevailing over the Olympic ideals."

000000
Popular comments
Excellent that the President stood up for these athletes whose only fault lies in their having Russian Nationality!A sad day when once again people are judged by the Passport they carry as opposed to their actual abilities in the field they are competing in.This outrageous condemnation and rejection of these innocent athletes is usually called Racism but the Western Media is too compromised and corrupt to report the truth and have the honesty to reject their paymasters orders.

Anton KOMAROV
25 August 2016, 13:59 GMT
000000
The olympics and politics have been intertwined for years ........as long as your country bends over to the powers that be then you will be invited to play ! If your country does not agree politically then your out ! As far as I'm concerned , Putin has proven that he will not play ball with a bunch of scum bags that run other countries in the west. Putin is making a lot of western leaders look like a bunch of fools in the political game with all of his maneuvers throughout the world. So who gives a crap if the Olympic committee politically screws with Russia. The bigger picture is that Russia is expanding it's might and the west is now worried !