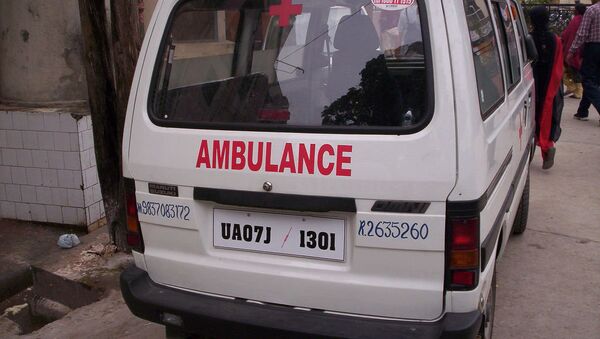 CC BY 2.0 / meg and rahul / Indian Ambulance
Subscribe
A viral video of a man carrying his dead wife on his shoulders has snowballed into a huge controversy in India's eastern state of Odishsa.

After being denied an ambulance, Daana Manjhi, a poor tribal resident of Melagahara, Odisha carried his wife who died while undergoing treatment for tuberculosis at a government hospital. Left with no option, he decided to carry her body on his shoulders to reach his village located 37 miles from the hospital.

When he had covered almost 10 miles, some locals noticed the fatigued man struggling to maintain his balance while carrying a corpse on his shoulders. He was accompanied by his 12-year-old daughter who was crying inconsolably. Upon knowing his plight, the villagers contacted local authorities who allegedly refused help. Upon much pleading, a local leader arranged for a vehicle to take them the rest of the way.

A video of the man as uploaded to the internet and it went viral on social media, attracting the attention of large media outlets that started to aggressively debate the administration's apathy toward the poor and needy. The government and hospital authorities tried to defend themselves by alleging that Daana had opted to carry the corpse himself as he was reluctant to let his wife be wait at the hospital’s mortuary until a vehicle was arranged.

Nevertheless, there was outrage and users vented their anger towards the government that otherwise boasts of taking care of its people from “cradle to grave.” The administration has ordered a probe into the matter.

And what kind of CRIMINAL Hospital refuses an ambulance to carry the dead body to the funeral site? Sack the mgmt.. https://t.co/GUA22aqfuC

000000
Popular comments
It's a brutal society where the poor are treated as dust. It's such a heartbreaking story. Respect in these countries is given only to those who have power, wealth, or political authority and who can impose their sense of entitlement with the lathi. Those who can't are seen as nothing. It's a system where the poor are not just disadvantaged, they are dehumanized. Money, connections, and the fist are all that count. When Indians stress what a 'good family' they are from, or what caste they call their own, they are simply seeking group protection from a crushing system of prejudice, violence, and rape perpetrated against the weak. As Nietsche said, fear is the mother of morality.