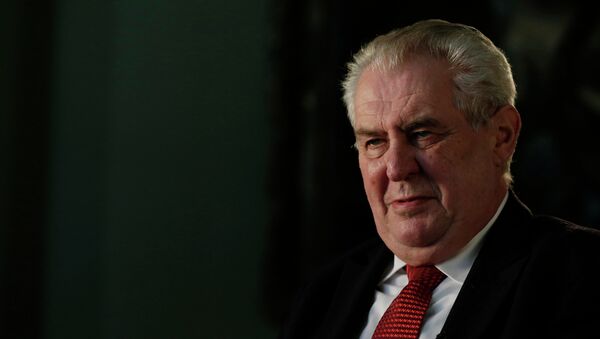 It is high time for the Czech Republic to decry the EU sanctions against Russia in a clear way and to campaign for their removal, Czech President Milos Zeman said on Thursday.

'Russia Too Big and Savvy for That': Merkel Sees No End to Sanctions on Moscow
PRAGUE (Sputnik) — Zeman, who has repeatedly criticized the EU sanctions on Russia, cited remarks by French Economy Minister Emmanuel Macron and German Foreign Minister Frank-Walter Steinmeier in support of removing the sanctions.

"The sanctions expose our helplessness. If politicians want to support our agricultural [sector], the Czech Republic should express its position, which has been indecisive so far, in a clear way in the European Council, joining the countries that support the sanctions' removal," Zeman said at the opening of an agricultural trade fair in the town of Ceske Budejovice.

"There are still people in the European Council who are afraid to make a decision and lift the sanctions," Zeman added.

Ties between Russia and the European Union suffered a severe blow after Crimea became part of Russia in 2014 and the West accused Moscow of meddling in the conflict in eastern Ukraine, imposing political and economical sanctions on Russia. The Kremlin has repeatedly refuted the accusations and introduced counter measures on a list of EU products.