From Germany, France to Scotland: Mind the Gap of Intolerance 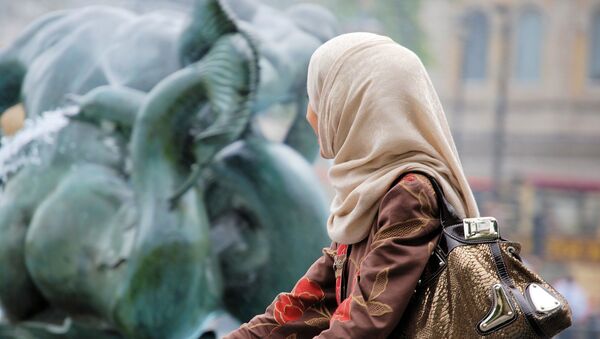 © Photo : Pixabay
Subscribe
International
India
Africa
The banning of the burqa, a full face veil, continues to rumble on across Europe, with different countries displaying varying levels of tolerance - or intolerance.

In Germany, Mayor of Brandeburg, a town west of Berlin, recently fired an intern who refused to remove her headscarf at work.

Burqa Bans, Possible Auxit: Hofer Kicks off Explosive Austrian Election Campaign
The intern from Palestine had been employed to work on a six-week refugee project called "Perspectives for Refugees" in the town of Luckenwalde.

The 48-year-old women said she didn't want to remove her headscarf in the presence of men. The mayor therefore said she could not offer her an appropriate working environment.

Thomas de Maiziere, Germany's interior minister recently announced that the full Islamic face veil "does not belong in our cosmopolitan country," further stoking the debate surrounding Islamic dress and with it xenophobic tensions.

Photographs recently emerged of armed police in France ordering a woman to remove her burkini, a full-body bathing costume, on a beach in Nice, displaying the full level of intolerance towards Muslims on the French Rivera.

However, rather than stocking fear and prejudice, police in Scotland have announced that the hijab, a head scarf worn by many Muslim women would become an official optional part of the force's uniform, diffusing and perhaps preventing any escalating tensions towards ethnic minorities.

​Serving officers could previously wear the religious headscarf with prior approval — but now it has been formally constituted as part of the force's uniform, allowing Muslim female police officers the freedom to wear a headscarf. The force hopes the announcement will encourage more Muslim women to join its ranks.

"I am delighted to make this announcement and welcome the support from both the Muslim community and the wider community, as well as police officers and staff," Police Scotland, chief constable Phil Gormley said.

"I hope that this addition to our uniform options will contribute to making our staff mix more diverse and adds the life skills, experiences and personal qualities that our staff officers and staff bring to policing the communities of Scotland.

"Like make other employers, especially in the public sector, we are working towards ensuring our service is representative of the communities we serve," chief constable Phil Gormley said.

In France, the burkini ban has been imposed on at least 15 towns.

"The ban is yet another case of French authorities using the language of secularism to demonize Muslims — and particularly Muslim women. This follows the ban on the headscarf for public sector workers, among other attacks," a statement from Stand up to Racism said.

While people gather for a protest in London outside the French embassy in solidarity with a women who was ordered by armed police on a beach in France to remove her burkini, police in Scotland  officially recognize the hijab part of a Muslim police officer's uniform.

​The contrast between the Scottish police and the officers in Nice has not gone unnoticed, with Twitter left stating the obvious.

You have #France and then you have #Scotland. So close geographically but so different. #BurkiniBan ❤️ #Ecosse https://t.co/K5TE3nYGJy