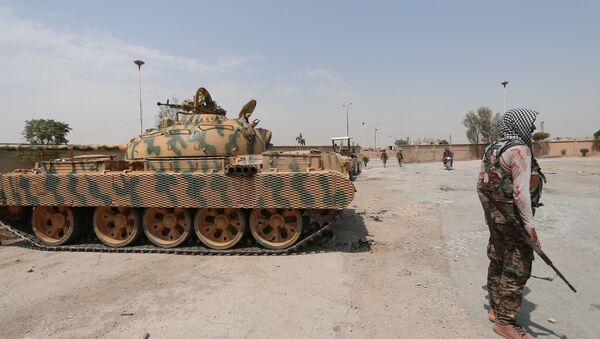 © REUTERS / Rodi Said
Subscribe
The US has pitted the Syrian Kurds against Damascus-led forces in the northeastern city of Hasakah in a bid not to lose regional influence should Turkey, Russia and Iran create an alliance to resolve the Syrian conflict, analyst and journalist Hüsnü Mahalli told Sputnik, adding that recent clashes are part of the West's "geopolitical games."

"Up until now Russia and Iran have helped to maintain cordial relations between the Syrian Kurds from the Democratic Union Party (PYD) and Damascus. The PYD made a mistake when it opted to cooperate with the US," he said.

Biden in Turkey: 'For Delicate Diplomacy, I’m Not Sure He’s the Guy You Send'
Kurdish militias, assisted by the US, have been trying to push radical groups, including Daesh and al-Nusra Front from northern Syria and secure the porous border with Turkey.  At the same time, the Kurds have established a de-facto autonomy in the areas under their control.

Mahalli emphasized that any efforts on the part of the PYD and the People's Protection Units (YPG) to create an independent state will be a mistake that could not be undone.

"The Americans have repeatedly said that they have a Plan B for Syria. Perhaps, this is what they meant. I'm afraid that the US has decided to drag the Kurds into a large-scale bloodbath," he added. 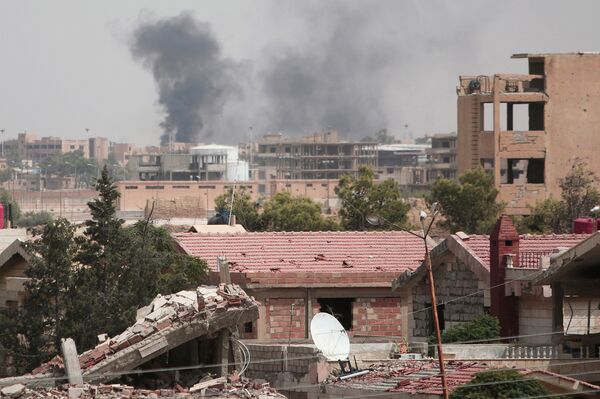 The standoff in Hasakah was sparked last week when the Kurdish forces tried to take the entire city under control, violating the ceasefire regime. The Kurds are reported to have captured large parts of government-held areas in Hasaka on Tuesday. The same day the YPG and Damascus-led forces agreed to halt fighting. The ceasefire came into force at 11:00 GMT.

The political analyst maintained that these events are part of a larger US plan for the region. "If the West is serious about its large-scale geopolitical games – and judging from what is happening in Hasakah, it is – then the situation is disturbing," he said.

Ankara’s Fear of Kurdish State Drives Turkey to Compromise Over Assad
The clashes between the Kurdish militias and the Syrian Arab Army (SAA) took place at a time when a major stakeholder, Turkey, made a U-turn in its foreign policy.

Turkey recently improved relations with Russia and Iran. The two countries were swift in providing support to the Turkish authorities when a group of military officers tried to overthrow the government on July 15 despite the fact that they were on the opposing sides of the Syrian conflict. Ankara sponsored radical groups trying to overthrow President Bashar al-Assad, while Moscow and Tehran have tried to prevent Islamist from destroying the Arab country.

The regional balance of power, according to Mahalli, will alter even further if the three nations decide to join their efforts to bring an end to the five years of violence in Syria. This will lead to what the analyst described as Washington's "inevitable weakening."

Mahalli further said that Turkey has found itself in the hot water. On the one hand, approximately 15-20 million Kurds live in Turkey. On the other hand, Ankara has become the target of Islamist terrorism even though the country supported radical groups fighting in Syria.

"The only right choice Turkey could make is to admit its mistakes and act decisively to overcome the deadlock. The Turkish leadership needs to act decisively. Should it wait for the outcome of the presidential election in the US, the implications could be hard to predict. My main concern is that Turkey will ultimately be shattered," he noted.

000000
Popular comments
"Up until now Russia and Iran have helped to maintain cordial relations between the Syrian Kurds from the Democratic Union Party (PYD) and Damascus. The PYD made a mistake when it opted to cooperate with the US," he said. -- I don't consider a character flaw a mistake. The Kurds have always been about, the Kurds and nobody else. I can see by what they have done before, that they lie, cheat or steal, or make deals with Israel, anything to get what they want. This was clear with how the Iraqi Kurds were hostile to the Iraqi government under similar conditions. But they betrayed the Iraqis to Erdogan over there. The only way the US can survive this is to elect Trump and stop this madness because those currently in control of the US are obviously willing to sacrifice the US for their agenda in the Middle East.
jas
24 August 2016, 12:00 GMT
000000
i think,if Turks shell on Kurds then what happens, will US attack Turkey. or there is something else happenning, 1. Turk VS Kurds include (US) 2. Turk, Russia, Iran, Syria, Lebanon VS Terrorists include USA 3. US wants them to fight between their selves, example: they want to divide Syria into different regions, Damascus, IRAN, Russia region 1, North Syria Kurds with US, and the remaining part will be for Turkey and Terrorists. they should fight between each other or they'll team up with each other to end terrorist. what if terrorist ends there. no terrorist in Syria will US backup their forces deployed in northern Syria and Turkey also.
ali
24 August 2016, 13:06 GMT
000000
Newsfeed
0
New firstOld first
loader
LIVE
Заголовок открываемого материала
Access to the chat has been blocked for violating the rules . You will be able to participate again through:∞. If you do not agree with the blocking, please use the feedback form
The discussion is closed. You can participate in the discussion within 24 hours after the publication of the article.
To participate in the discussion
log in or register
loader
Chats
Заголовок открываемого материала
Worldwide
InternationalEnglishEnglishMundoEspañolSpanish
Europe
DeutschlandDeutschGermanFranceFrançaisFrenchΕλλάδαΕλληνικάGreekItaliaItalianoItalianČeská republikaČeštinaCzechPolskaPolskiPolishСрбиjаСрпскиSerbianLatvijaLatviešuLatvianLietuvaLietuviųLithuanianMoldovaMoldoveneascăMoldavianБеларусьБеларускiBelarusian
Transcaucasia
ԱրմենիաՀայերենArmenianАҧсныАҧсышәалаAbkhazХуссар ИрыстонИронауОssetianსაქართველოქართულიGeorgianAzərbaycanАzərbaycancaAzerbaijani
Middle East
Sputnik عربيArabicArabicTürkiyeTürkçeTurkishSputnik ایرانPersianPersianSputnik افغانستانDariDari
Central Asia
ҚазақстанҚазақ тіліKazakhКыргызстанКыргызчаKyrgyzOʻzbekistonЎзбекчаUzbekТоҷикистонТоҷикӣTajik
East & Southeast Asia
Việt NamTiếng ViệtVietnamese日本日本語Japanese中国中文Chinese
South America
BrasilPortuguêsPortuguese
NewsfeedBreaking
15:42 GMTDrug Sniffer Dog Van Spotted Outside Parliament After Cocaine Use Reported to Cops
15:31 GMTCalifornia Port Congestion Slowly Shrinking, But Still Risks Christmas Goods Delays
15:28 GMTRose McGowan’s Lawsuit Against Weinstein Dismissed After She Fails to File Paperwork by Deadline
15:27 GMTRussian President Putin and His US Counterpart Biden Hold Virtual Meeting
15:19 GMTUS Leaders Speak With Forked Tongue
15:18 GMTPence's Former Chief of Staff Reportedly Agrees to Cooperate With 6 January Committee
15:13 GMTFrench Police Arrest Suspect in Connection With Journalist Jamal Khashoggi's Murder, Media Claims
15:07 GMTIndian Government Denies Reports From China of Infiltration Attempts
15:06 GMTSchool Principal in India's Uttar Pradesh Accused of Molesting 17 Girls
15:01 GMTFrench Presidential Candidate Zemmour's Party Now Counts 20,000 Members, Report Says
14:49 GMTBiden Visits WWII Memorial to Honour Pearl Harbor Tragedy - Photo, Video
14:49 GMTLegal Expert: BoJo's Judicial Review Reform Boosts Arbitrary Concentration of Power in No 10's Hands
14:36 GMTUK's Johnson Dismisses as 'Nonsense' Claims He Prioritised Animals in Kabul Evacuation
14:32 GMTAttack on US Military Convoy in Syria Causes ‘Huge Damage’ to Equipment, Report Says
13:56 GMTUK Deputy PM Says COVID ‘Plan B’ is ‘Not Required’ in Face of Omicron Variant
13:48 GMTIndian Teenager Arrested After 'Decapitating Pregnant Sister, Taking Selfie With Her Severed Head'
13:39 GMTGOP Representative Nunes Resigns Congress to Head Trump Media Firm
13:31 GMTFrench Presidential Hopeful Zemmour Explains Why Russia's NATO Expansion Concerns Are 'Legitimate'
13:13 GMTUS Allegedly Mulls Limiting Russia's Ability to Convert Currency to Deter It From 'Invading' Ukraine
13:12 GMTFire in Burundi Prison Reportedly Kills 38 People, Injures 69 Others - Photo, Video