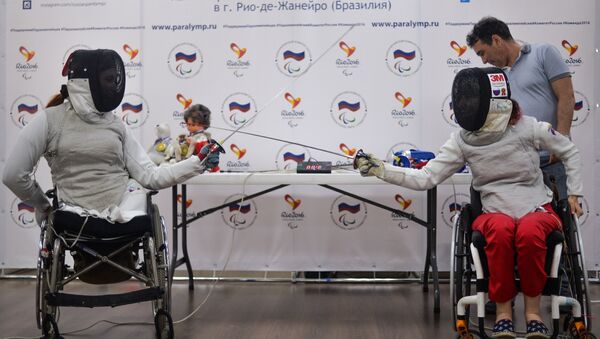 © Sputnik / Vladimir Astapkovich
/
Go to the photo bank
Subscribe
Athletes and Paralympic Committees from around the world are outraged due to the blanket ban of all the Russian Paralympic athletes from participating in the 2016 Paralympics, which will be held September 7 to 18.

The Court of Arbitration for Sport (CAS) rejected Russia's complaint on August 23 against the decision of the International Paralympic Committee (IPC), which bared the entire Russian team from the Paralympic Games in Rio de Janeiro. The IPC decided to suspend Russian Paralympic athletes on the basis of McLaren's report on the "doping program" in Russia, but the authors of this document refused to provide any specific proof of this theory.

Head of the Armenian National Paralympic Committee Hakob Abrahamyan considers that political decisions have no place in sport. "This decision will derail the Games and the Paralympic movement in the whole world. This is a wrong decision. Politics has no place in sport — that is what I have already said many times," Abrahamyan told Sputnik Armenia.

Estonian athletes and coaches also condemned the IPC and the arbitration decision. President of the sports club Khreshchatyk and football coach Boris Fedorenko said that, in such cases, the approach must be individual to each athlete. "All the medications that Paralympians use are necessary — and this is medication for sure; they would not swallow any trash being unhealthy people. They have the right to choose their medication," the coach told Sputnik Estonia.

Blanket Ban on Russian Paralympians is 'Slap in the Face' for Disabled Athletes
Winner of the international bodybuilding competitions Oleg Fedorov called the decision on non-admission an immoral and political act. He believes that the Games in Rio will be remembered by most as "the most dirty and dishonest" ones. "In 2020, Russia should refuse to participate in the next Olympics!" he said.

Azerbaijani athlete Zinet Veliyeva, who will represent her country at the 2016 Paralympics in archery, considers the IPC decision wrong. "In contrast to the healthy ones, for Paralympic athletes, four-year training and fighting for permits to take part in this prestigious competition is especially difficult," she told Sputnik Azerbaijan.

Executive Director of the National Paralympic Committee of Kazakhstan Yerlan Suleimenov stressed that the main principle of the Paralympic movement is to involve people with disabilities in sport, and the IPC decision can demotivate them and put this principle in jeopardy.

President of the Paralympic Committee of Kyrgyzstan Bakyt Isakov thinks that the Paralympic Games without the Russian team will be inexpressive. "This is a wrong decision. It is necessary to punish those who are guilty of doping, rather than the whole country. This can be seen as an attempt ‘cut off' the entire Russian Paralympic movement," he told Sputnik Kyrgyzstan.

"The fact that people with disabilities are put at the heart of policy is total blasphemy," he told Sputnik Belarus. According to the PCB chairman, it is all a political gimmick that aims to split Russia apart. "But they do not realize that this only helps people unite even more," Shepel said.

"It's political pressure on Russia, which is put on the most vulnerable people — the Paralympic athletes, who have overcome a lot and do much more than usual people without any physical defects do. The decision is just like a slap in the face," Head of the Georgian Center for Global Studies and former Public Defender Nana Devdariani told Sputnik Georgia.

According to the head of the Anti-Doping Agency of Moldova Sergei Afanasenko, the Russian team is one of the strongest. "It is the main competitor at the Paralympic Games. I wish the decision was not associated with politics. Sport is sport; it knows no bounds — it is out of politics," he told Sputnik Moldova in an interview.

CAS Decision on Russian Paralympics Ban Shows Doping Has No Place in Sport
Russian lawyer Anatoly Kucherena claimed that the Paralympic team was debarred without any evidence. He urged Russians not to give up and seek justice. "Sports officials are basing their decision solely on assumptions and rumors. The decisions are taken, but no one bears the responsibility, because big politics have interfered. It is necessary to encourage these people to seek justice. The CAS solution is still possible to challenge, and I think we should go further, up to the Strasbourg Court," he said in an interview to Sputnik.

Russian Paralympic coach Irina Gromova noted that the IPC must specify its claims against the Russian athletes. "Two hundred and sixty-seven athletes are removed. For what?! Make at least one proper complaint, tell me my athletes are to blame for something. Then I will not take them anywhere myself," she said.

Banning our Paralympic athletes from Rio 2016 is a cynical decision motivated by desire to remove strong rivals https://t.co/zWXfsav7Jl

CAS decision to uphold Russia's ban from Paralympics make IOC look, as if it were possible, even worse.

​"I consider the CAS decision on the exclusion of Russian Paralympians a horrendous crime against people with disabilities!"

The #IPC has been grossly unfair to the Russian #Paralympic Athletes! These people have struggled for 4 yrs to compete! #DisabledByIPA:(

The ban on Russian Paralympic athletes is not something to celebrate. It's a no-win situation. I have mixed feelings https://t.co/2Vz2TS1sxf

The decision by #CAS to uphold the blanket ban on the #Russian #Paralympic team is not only immeasurably unjust but also immeasurably cruel.

In order to support Russian Paralympians, Olympic athletes started using a hashtag in Russian that means "stronger than anyone:"

"The removal of our Paralympic Team is a monstrous injustice. It is immoral and inhumane. You guys are stronger than anyone" Mayor of Moscow Sergei Sobyanin wrote on Twitter.

​An online petition against the decision was launched on social media and has exceeded over 282,000 signatures of 300 thousand needed.

000000
Popular comments
Yet again disgusting, evil wester elite has showen it's methodes ! The time has been long overdue in removing this evil creature from the face of this earth once and for all !!!
rishardhawk
24 August 2016, 17:51 GMT1
000000
So they tried to fcuk with the olympics and did not get any where so then they fcuk with the paralymics, sad sorry bunch of no good shameful oxygen wasters