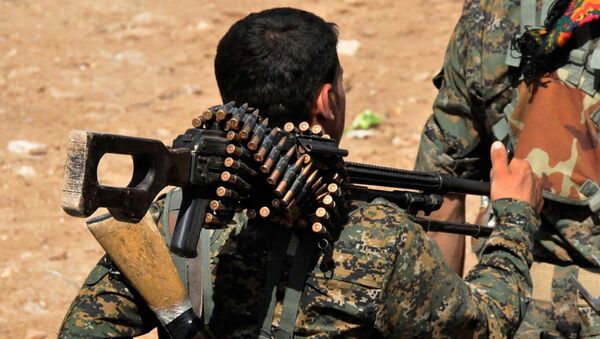 © Flickr / Kurdishstruggle
Subscribe
International
India
Africa
Stability and peace in the Middle East, hit by a jihadists insurgency, can not be reached without taking into account the stance of Kurds on the issue, the Russian parliament’s Deputy Speaker Sergei Zheleznyak said.

Iraqi Kurdistan, Turkey Agree Anti-Daesh Strategy - Kurdish Leader
MOSCOW (Sputnik) — Earlier in the day, the Russian Foreign Ministry said that the Syrian crisis can only be resolved through dialogue and on the basis of international law, expressing worry over reports of Turkey’s campaign in northern Syria.

"Apparently, peace in the Middle East is impossible without taking into consideration the Kurdish stance. The current illegal Turkish military campaign in northern Syria under the pretext of fighting against terrorism is aimed at the Kurds," the senior lawmaker wrote on his Facebook account on Wednesday.

Earlier on Wednesday, Ankara launched the "Euphrates Shield" military operation with US-led coalition air backing with the stated aim to clear Jarabulus in northern Syria from Daesh jihadists. Syrian Kurds and Damascus accused Ankara of violating the territorial integrity of the Arab republic.