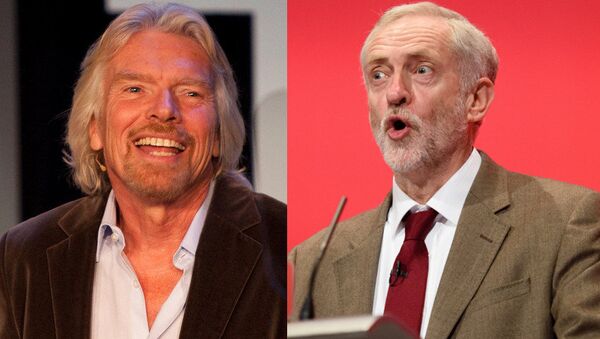 Two of Britain's most famous bearded men have been drawn into an extraordinary row over UK trains, with Labour leader Jeremy Corbyn accused of lying after he claimed he was forced to sit on the floor of one of Sir Richard Branson's "ram-packed" Virgin trains.

The saga started on August 11, when Corbyn was filmed in a video sitting on the floor of a "ram-packed" London to Newcastle train, purportedly because of a lack of free seats throughout the carriages.

video of the 'Corbyn train', jam packed, commentary from nearby passenger on the phone https://t.co/l2k5P9wBZq

"This is a problem that many passengers face every day; commuters and long-distance travelers. Today this train is completely ram-packed," Corbyn said in the video.

A Corbyn spokesperson then tied the issue to the Labour leader's pledge to re-nationalize the UK's railways.

"Passengers across Britain will have been in similar situations on overcrowded, expensive trains," he said.

"That is why our policy to bring the trains back into public ownership, as part of a plan to rebuild and transform Britain, is so popular with passengers and rail workers."

However, Virgin boss Sir Richard Branson hit back at Corbyn, tweeting an image of Corbyn walking past empty seats on the day in question. The tweet did however, appear to show many of the empty seats were marked with reservation tags.

Along with the image he tweeted: "Mr Corbyn & team walked past empty-unreserved seats then filmed claim train was ‘ram-packed'."

​The response triggered a media frenzy, with Virgin also releasing CCTV images of Corbyn eventually finding a seat on the train. Corbyn admitted that staff had eventually found him and his wife a seat 45 minutes into his journey, and only after some other passengers had been upgraded to first class.

A ram packed House of Commons. Jeremy Corbyn will have to sit on the floor.#traingate pic.twitter.com/94pDsttRXe

​"We have to take issue with the idea that Mr Corbyn wasn't able to be seated on the service, as this clearly wasn't the case," a Virgin spokesperson said.

"We'd encourage Jeremy to book ahead next time he travels with us, both to reserve a seat and to ensure he gets our lowest fares, and we look forward to welcoming him onboard again."

The saga comes at a testing time for the Labour leader, who is currently facing a challenge from Owen Smith for the party's leadership.

While Corbyn is expected to win the leadership election, the suggestion that he embellished his story to push forward his case for rail re-nationalization has drawn criticism within the media.

Seemingly alluding to the train row, Labour challenger Smith tweeted to say that his campaign was "on track."

My campaign remains on track. Proud to be genuinely standing up for ordinary people.

​The matter has seen Corbyn supporters come out in defense of the Labour leader, with a number of passengers on the August 11 train backing his call that it was "ram-packed."

Sam Tarry, Corbyn's campaign director, went a step further, describing Branson as a "tax exile" who is "laughing all the way to the bank at the British taxpayers' expense."

Perhaps @richardbranson. Corbyn's promise to re-nationalise the railways that we subsidise for you. Might have something to do with it?

​"The bigger story here is quite astonishing, that a tax exile of more than ten years decides to lay into and make a political intervention, which is essentially what this is, on social media, in a very public way," he told BBC Radio.

"I think it's quite clear, Richard Branson is literally laughing all the way to the bank at the British taxpayers' expense," he added.

"This guy is a tax exile. In the last year this chap has made around about £53 million [over US$70 million] direct from the taxpayer, and that's profit."